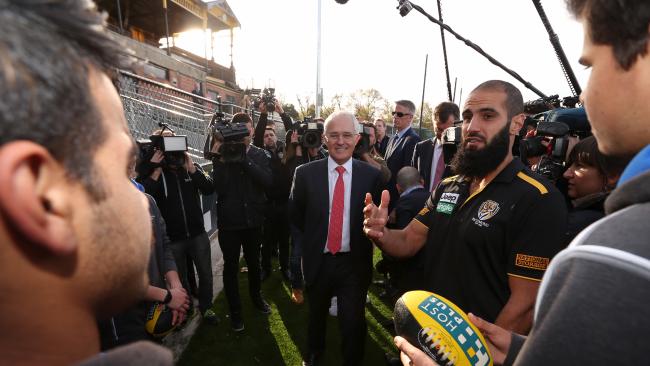 THE AFL is offering 10 “diversity trainee” positions worth $34,000 a year exclusively to Muslim youth as part of a Federal Government-funded program.

To be eligible for the positions, which span a range of areas including social media, administration, finance and marketing, applicants must “be from Muslim background”, and “have recently completed secondary school”.

“To help assist Muslim young people make that step into employment, the Federal Government has provided funding support for 10 traineeships for Muslim young people to work across the AFL industry over a 12 month period to gain critical work experience and job skills.

“The AFL in turn has partnered with AFL SportsReady to offer a unique traineeship opportunity as part of the Bachar Houli Employment Program.”

The Turnbull government earlier this year announced the traineeships as part of an additional $625,000 in funding for the AFL’s long-running Bachar Houli Cup and Leadership Program.

Bachar Houli, the AFL’s Multicultural Ambassador, is Richmond’s star player and considered a mentor and role model for young people in the community.

Houli was a guest at Malcolm Turnbull’s pre-election Iftar dinner celebrating the end of Ramadan.

The “selection criteria” for the AFL positions advertised in Victoria and Queensland specify that applicants “must be from a Muslim background”, with a disclaimer noting that the action constitutes a “special measure” or “equal opportunity measure” under the respective state anti-discrimination laws.

In NSW, which is the only jurisdiction without a clear “special measures” provision in its anti-discrimination legislation, the listing reads: “Applicants from a Muslim background are strongly encouraged to apply for this position”.

The fulltime positions receive the National Training Wage Award plus superannuation, which comes to slightly over $34,000 for the 12 months.

The AFL offers a number of similar positions for Aboriginal and Torres Strait Islander school leavers as part of its diversity traineeship program, which provides “employment path ways and skill development in young multicultural and indigenous people aged 15-19”.

On the funding announcement in May, Justice Minister Michael Keenan said the program “contributes to a resilient and harmonious society united around shared values of mutual respect, freedom of speech and freedom of belief”.

“It uses sport as a great way to embrace diversity while providing students from Islamic schools with the opportunity to learn to play football in a fun, non-competitive environment,” he said.

The 2016-17 program includes funding for “AFL-hosted Iftar and Eid events held nationally during Ramadan to engage with communities and foster improved cultural education and awareness”.