Babylon's history swept away in US army sandbags 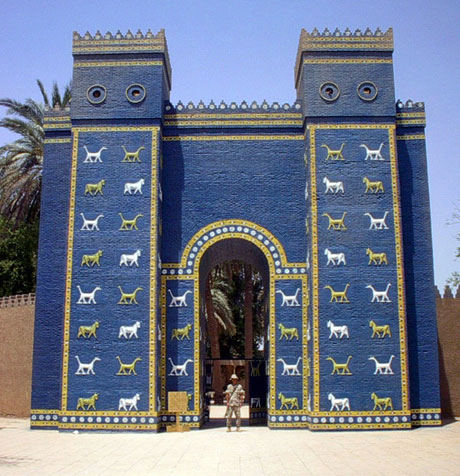 Fragments of bricks, engraved with cuneiform characters thousands of years old, lie mixed with the rubble and sandbags left by the US military on the ancient site of Babylon in Iraq.

In this place, one of the cradles of civilisation, US troops in 2003-2004 built embankments, dug ditches and spread gravel to hold the fuel reservoirs needed to supply the heliport of Camp Alpha.

Today, archaeologists say a year of terracing work and 18 months of military presence, with tanks and helicopters, have caused irreparable damage. The Americans remained five months in Babylon and then handed over to the Poles who pulled out 16 months later.

Hands on hips, and wearing a seemingly permanent air of dismay, Maithem Hamza, director of the -- totally empty -- museum on the site, points to the soil: "Look at this land, it is packed with remnants. They filled their bags with them."

He pushes with his foot a fragment of raw brick, with cuneiform inscriptions plainly visible. To one side of it, on soil filthy with fuel oil, lies the broken door of a Hummer, the US army's light vehicle.

Undoubtedly the palace built on the site and on an artificial hill in 1993 by then-president Saddam Hussein drew the US military to Babylon during its invasion in March 2003.

The palace, like elsewhere in Iraq, was requisitioned as a military headquarters.

On one wall, near the door of the monumental entrance, a black stencil proclaims: "Building No.1". Further on, adorning a warehouse wall, graffiti reads: "Miss you, Smoothy!."

From April 2003 to June 2004, huge gravelled avenues were gouged out around the ruins of the palaces of Nebuchadnezzer in order to set up prefabricated buildings which became home to up to 2,000 troops.

The heliport is only some 300 metres (yards) from the remains of the north palace, and according to Maithem Hamza, vibration from the aircraft caused the base of the temple of Ninmah -- rebuilt by Saddam in the 1980s -- to collapse.

In a report published in 2005, experts from the British Museum confirmed that damage visible on nine of the dragon casts on the temple's Door of Ishtar, and those on the cobbles of the processional way, were due to vibration caused by the passage of heavy machinery.

"That which is broken is broken... We will try to repair what we can," said Maryam Omran Mussa, director of the site, speaking in her office near the entrance to the site which has been closed to the public since 2003.

"Many of the relics were buried near the surface. Vibration from tanks and lorries caused irreversible damage, that's for real... From the start, we told the Americans (their actions) were a mistake. I wrote letters...

"They finally understood, and left, but it took time."

British Museum curator John Curtis was one of the first to sound the alarm over the ancient site.

"They understood when photographs started to be published on the World Wide Web, particularly aerial photographs showing the extent of the military camp there," he said.

"It's only because of that that the military authorities of the coalition started to be very nervous and decided that they had to leave."

In the face of the protests, terracing and building work was interrupted in June 2004, six months before the troops left.

In its defence, the US military argued that if its presence there certainly had caused damage, it had also protected the site from looters who were running riot during the first weeks of the occupation.

Questioned in 2006 in a programme on the BBC, Marine Colonel John Coleman accepted the principle of an apology to the director of the Iraqi antiquities department.

"If it makes him feel good, I can certainly give him one," he said.

But he added: "Is there a price for the presence? Sure. I'll just say that the price had the presence not been there would have been far greater."

For Curtis, however, the price of the military presence was extremely high.

"A lot of the damage done is permanent. For example digging these long trenches: 170 metres long and more than two metres deep, this is not reversible, this is permanent damage that will last forever."

Another problem arrived in the earth brought from outside the site to fill sandbags. "It contaminates the record of Babylon for the next generations of archeologists," said Curtis.

"Moving the gravel can be done, but it's a very long and very expensive job. And in the process, more damage would be done."

Despite the damage to such an historic site, Curtis accepted that the US military believed that "building a base there wouldn't actually cause any damage."

He commented: "I don't think it's malicious: it comes from ignorance and stupidity, definitely."