Jan 17, 2010 Source: livescience.com
Scientists have discovered the earliest known Hebrew writing — an inscription dating from the 10th century B.C., during the period of King David's reign.

The breakthrough could mean that portions of the Bible were written centuries earlier than previously thought. (The Bible's Old Testament is thought to have been first written down in an ancient form of Hebrew.)

Until now, many scholars have held that the Hebrew Bible originated in the 6th century B.C., because Hebrew writing was thought to stretch back no further. But the newly deciphered Hebrew text is about four centuries older, scientists announced this month. 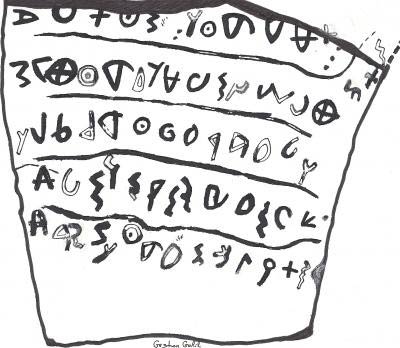 The ancient text shown in this drawing was discovered on a shard of pottery in Israel, and turned out to be the earliest known example of Hebrew writing. Credit: University of Haifa.
"It indicates that the Kingdom of Israel already existed in the 10th century BCE and that at least some of the biblical texts were written hundreds of years before the dates presented in current research," said Gershon Galil, a professor of Biblical Studies at the University of Haifa in Israel, who deciphered the ancient text.

BCE stands for "before common era," and is equivalent to B.C., or before Christ.

The writing was discovered more than a year ago on a pottery shard dug up during excavations at Khirbet Qeiyafa, near Israel's Elah valley. The excavations were carried out by archaeologist Yosef Garfinkel of the Hebrew University of Jerusalem. At first, scientists could not tell if the writing was Hebrew or some other local language.

Finally, Galil was able to decipher the text. He identified words particular to the Hebrew language and content specific to Hebrew culture to prove that the writing was, in fact, Hebrew.

"It uses verbs that were characteristic of Hebrew, such as asah ('did') and avad ('worked'), which were rarely used in other regional languages," Galil said. "Particular words that appear in the text, such as almanah ('widow') are specific to Hebrew and are written differently in other local languages."

The ancient text is written in ink on a trapezoid-shaped piece of pottery about 6 inches by 6.5 inches (15 cm by 16.5 cm). It appears to be a social statement about how people should treat slaves, widows and orphans. In English, it reads (by numbered line):

The content, which has some missing letters, is similar to some Biblical scriptures, such as Isaiah 1:17, Psalms 72:3, and Exodus 23:3, but does not appear to be copied from any Biblical text.

Dr. Joye Jeffries Pugh - Eden, The Knowledge of Good and Evil & The Antichrist