Feb 13, 2010 Source: aclu.org
We're not the type to say "I told you so." Alright maybe we are. In this case we just couldn't help ourselves.

Since December, we've been expressing skepticism about the deployment of whole body imaging at airports. We call them virtual strip searches because we think the graphic images they create of people are incredibly invasive. We've even noted that images of famous people are likely to be particularly prized.

Well the future is now. Bollywood superstar Shah Rukh Khan recently disclosed that he received a whole body scan at the airport. But contrary to the stated policy of the British government, this image was not immediately discarded.

Instead, airline personnel apparently printed it out.

In Khan's own words:

'I was in London recently going through the airport and these new machines have come up, the body scans. You've got to see them. It makes you embarrassed — if you're not well endowed.

'You walk into the machine and everything — the whole outline of your body — comes out.'

[...]'Then I saw these girls — they had these printouts. I looked at them. I thought they were some forms you had to fill. I said 'give them to me' — and you could see everything inside. So I autographed them for them.'

We admire Khan's ability to make the best of a bad situation — recall his experience at Newark last year — but we doubt he is too happy about the government allowing perfect strangers to take and keep naked images of his body. All of this points to the need for laws that ban the copying and other misuse of these images as well as a legal right to recover damages if they are.

Now we just hope that our raising the issue of body cavity searches doesn't prove to be equally accurate. 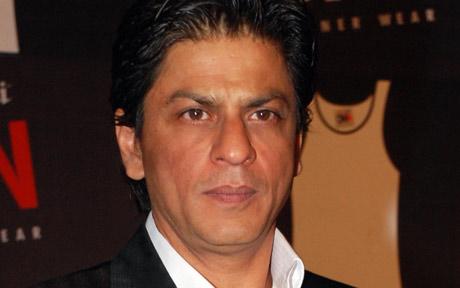 Shahrukh Khan Photo: AFP/GETTY IMAGES
The airport owner said the claims made by the My Name Is Khan star on the Friday Night with Jonathan Ross show were “completely factually incorrect”.

The 44-year-old pin-up, nicknamed ‘SRK’, said female security staff at the London airport had printed his naked image, as captured by the newly-installed body scanner.

He even claimed he had autographed the pictures, although it is not clear if his comments were intended as a joke.

The star’s claims have resonance because his latest film, My Name Is Khan, which is about racial profiling of Muslims at airports after the September 11 2001 terror attacks.

A report last August that he was detained for questioning at Newark Liberty Airport near New York City sparked outrage in India.

Appearing on the BBC chat show, he told Mr Ross of his experiences with the new body-scanners, that were introduced at Heathrow on the orders of the UK government in the wake of the transatlantic Christmas Day terror attack on a plane as it neared Detroit.

He said: “I'm always stopped by the security, because of the name. And I think its okay: the western world is a little bit worried, paranoid and touchy, I guess – and freely when they're frisking you.

However, a BAA spokeswoman said the claims were “completely factually incorrect” because the body-scanning equipment had no capability to print images. She stressed that images captured by the equipment could not be stored or distributed in any form.

She also added that the scanners had only been brought into use four days before the chat show was recorded and was only used for departing passengers, making it unlikely – although not entirely impossible – that the Bollywood actor would have used them in any case.
She said there would be no investigation into his claims because they "simply could not be true".

Khan was not immediately available for comment on the BAA denial.
He has appeared in more than 70 films, and has consistently topped popularity rankings in India for the past several years.