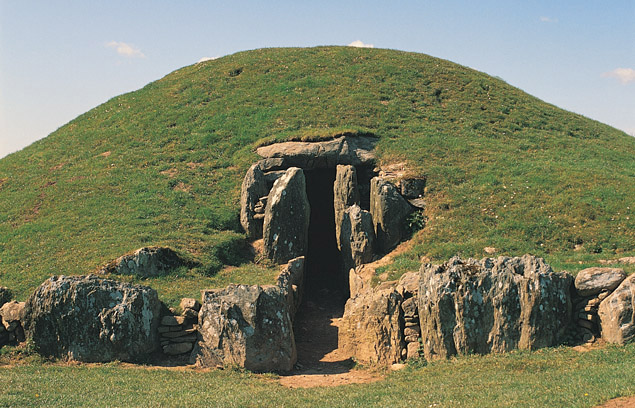 Viewed from the nearest road it doesn’t look too impressive. A circular, raised mound the size of a small house in the middle of some cattle-grazed fields on the Isle of Anglesey off the northwest tip of Wales. But get up close and this Stone Age monument – Bryn Celli Ddu – is very obviously an extremely ancient construction well worth the visit.

It might not seem to have anything in common with southern England’s famous and much larger prehistoric monument, but recent research suggests that it might have provided part of the inspiration for the construction of Stonehenge, arguably the most famous prehistoric “building” in the world. 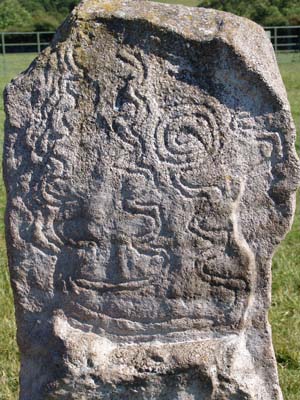 Today, Bryn Bryn Celli Ddu (the mound in a dark grove) is under the protection of CADW, the Welsh Government’s historic environment service (http://cadw.wales.gov.uk/daysout/bryn-celli-ddu-burial-chamber). When it was built, the circle was probably located in a large clearing used for primitive farming but entirely surrounded by forest, hence the name. Only a few small copses of trees survive anywhere nearby today.

Read the CADW information board at the site or research Bryn Celli Ddu on-line and you’ll be told that it started life around 3,000BC (the late Neolithic era) as a henge or ritual enclosure; a stone circle surrounded by a bank and internal ditch, like a very small and primitive version of Stonehenge. Over the years, archaeologists have found evidence for at least fourteen of these stones at Bryn Celli Ddu; two of them had the burnt bones of a young girl buried at their bases.

The henge that was changed to a burial chamber?

Then, according to the archaeological wisdom promoted since the 1960s, everything changed hereabouts! The henge was dismantled in the early Bronze Age (around 2000BC); five stones were removed, two toppled, one buried, and six broken. Excavation revealed that the broken stones had been toppled and then smashed by dropping other heavy stones on them, and all of the stones except one were intentionally damaged before being buried beneath the cairn suggesting that the next development phase at this site wanted rid of any trace of the henge that was there!

The new settlers then supposedly built a passage grave over the top of the centre of the henge, the main structure that survives here today. Built entirely of stone, this structure is capped with large flatter stones and turfed over with grass on the outside, much of the roofing a restoration carried out only a few decades back.

Dark and narrow, you have to crouch as you walk along its fifteen feet long, stone-ceilinged passageway into the centrepiece of the grave, a circular stone chamber tall enough to stand up in (just about) around eight feet in diameter, stone and turf covered. It’s an enigmatic place, cool and damp, dimly lit by a shaft of daylight, a reminder that Stone Age people once stood exactly where you stand now.

A standing stone with a carved, twisting, serpentine-like design stood originally inside the chamber but it was moved to the National Museum of Wales in Cardiff for safe keeping and replaced with a replica standing outside the chamber. No one knows what its complex symbols mean.

There are old records establishing that the site was visited, and probably plundered, from 1699 onwards, and excavated in 1865 and again between 1927 and 1931. In the passage and in the chamber, human bones – some burnt, some not – a stone bead, two flint arrowheads, a scraper and mussel shells were found. More bones from burials might have been present but were probably removed over the centuries.

But this established interpretation of a henge later converted to a burial chamber, and adopted as the definitive explanation of what went on at Bryn Celli Ddu, has been turned upside down by recent research carried out by Dr Steve Burrow, Curator of Neolithic Archaeology at The National Museum and Galleries Wales.

He’s concluded that the evidence points to the whole structure being built all in one go around 3,000BC and that there was no original henge followed later by its “conversion” to a burial chamber. Burrow suggests that the standing stones in a circle could have been a ritual boundary on the outside of the burial chamber.

Lined up to mark the summer solstice

But Steve Burrow has made another amazing discovery at Bryn Celli Ddu. He knew that Norman Lockyer, a scientist who researched the site, had argued in 1906 that Bryn Celli Ddu marked the summer solstice (Midsummer Day, the longest in a year). He was ridiculed by Welsh archaeologists at the time but Burrow decided to test out the idea.

Read the full article at: suite101.com 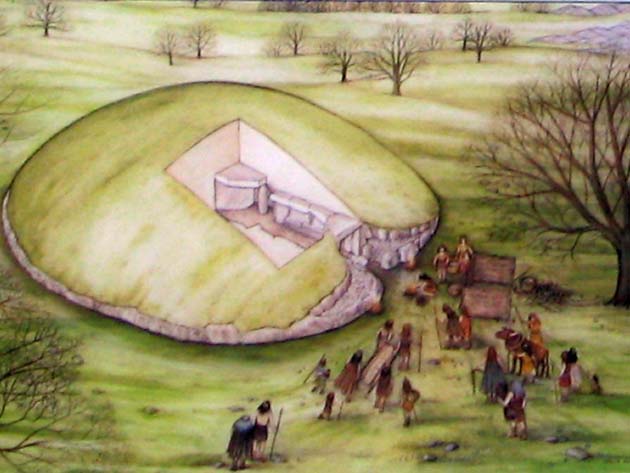 A modern representation of the Burial Chamber 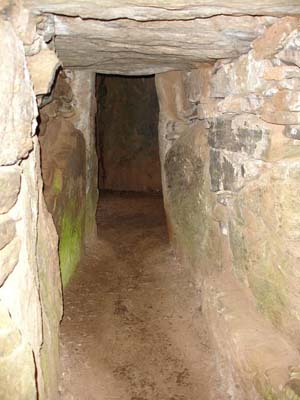 Standing in the entrance, looking towards the centre of the chamber.