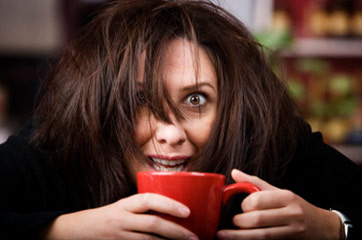 When I first heard about caffeine-induced psychosis, I laughed but a few days later when I drank too much coffee and felt crazed and then strung out, it wasn’t so funny anymore. The western world (but not excluding the east) loves caffeine in every form, especially coffee. Have you noticed that coffee is available for free in most offices and waiting areas? Behind petroleum, coffee is the second most traded product in the world. Could you imagine what it would be like if coffee production stopped and the planet had to suffer caffeine withdrawals? It would be a month of madness.

Caffeine can have a powerful psychological and physical hold on you. It makes me think of the TV series SGU Stargate Universe where a team of soldiers and scientists from present day Earth escape through the stargate to find the ancient ship called Destiny, which was launched by the ancients from our galaxy several million years ago. Incredible revelations are being had yet the brilliant lead scientist, Dr. Rush spirals into a dark place because of his caffeine withdrawal. He was in hell and missing his 4 cups of coffee a day. Watch this clip until the end: The Coffee Deprived "Mad Scientist".

"If a person were injected with 500 milligrams of caffeine [less than the dosage in some 16-ounce brews], within about an hour he or she would exhibit symptoms of severe mental illness, among them hallucinations, paranoia, panic, mania, and depression. But the same amount of caffeine administered over the course of a day only produces the milder forms of insanity for which we take tranquilizers and antidepressants."

"For five years I worked in a team practice with physicians and psychotherapists. Often, the psychological evaluation would include one or more anxiety syndromes, and the recommendation was for counseling. I would point out that the person was consuming excessive amounts of caffeine and request a trial month off caffeine prior to therapy sessions. In about 50% of cases, the anxiety syndrome would resolve with caffeine withdrawal alone."

"In over a decade of practice as a clinical nutritionist, I have seen firsthand, with thousands of clients, that caffeine is a health hazard. Anxiety, muscle aches, PMS, headaches....However, if that’s all caffeine has done to you, you’re lucky. What about people misdiagnosed as neurotic or even psychotic, who spend years and small fortunes in psychotherapy--all because no one asked them about their caffeine intake?" 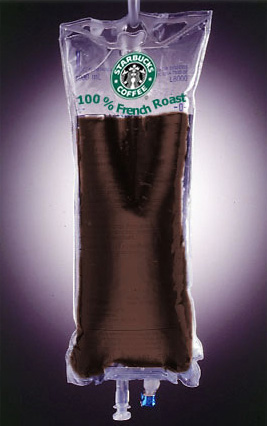 Cerebral allergy is an allergy to a substance, which targets vulnerable brain tissue and alters brain function. It seems more common with substances that trigger the release of chemicals. The longer one is exposed to a drug (including caffeine), the higher the chances are for developing a tolerance and an allergy to the substance. A masked caffeine allergy leads to toxicity which can make someone mimic actions of a crazy person! Read some of these accounts from stress-anxiety-depression.org

After a month off of caffeine, I noticed a big change in my personality. I started to feel grounded and focused again. The world looked different to me. Well, after the horrific withdrawals. It caused me to re-evaluate my psychological need for that morning coffee dose that many of us have developed. Is caffeine evil? No but if you’re exhibiting mental symptoms that aren’t really you or if you’re suffering from physical agitation, it’s time to wean yourself off of it. You may find life is completely better without it or you may find just having less is the remedy.

If you do drink coffee, buy from organic coffee companies because the chemicals/pesticides used for coffee growing are incredibly toxic.

Is there a conspiracy to push coffee consumption to keep us in a specific altered state? Maybe.

Drinking coffee, cacao and other substances were part of a special ritual among tribal people, not a daily guzzle fest.