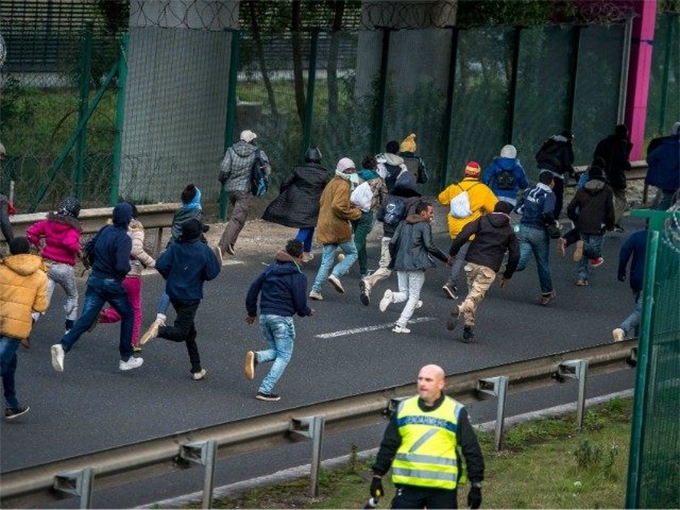 Hauliers have again called for a security boost at Calais as the rise in migrant numbers means they now outnumber security forces by 18 to one. Just 1,300 officers working on shifts are deployed to the town, where nearly 7,000 migrants are trying to get on board UK-bound lorries day and night.

“Even if the entire security contingent was to be deployed at any one time, the ratio would still be hard pressed to cope at 5:1,” said executive Richard Burnett, chief executive of the Road Hauliers Association (RHA)

“The level of security currently in place barely scratches the surface of the problem. It’s therefore hardly surprising that recent days have seen incidents of violence and attacks on trucks far worse than have been seen in recent months. And with Christmas produce still travelling across the Channel, the next few days will inevitably see a concerted push by migrants to reach the UK.”

His warning comes just days after a thousand migrants stormed the approach to the Channel Tunnel, working in groups of 50-60 at a time to slow lorries by blocking the road and help each other aboard. Some of the migrants were armed with hammers, iron bars and rocks.

Eurotunnel spokesman John Keefe described the migrant’s operation as a “well-organised and orchestrated attempt” to enter Britain during one of the busiest days of the year for freight. Between 6,000 and 7,000 lorries made the crossing into the UK on Friday.

“Opportunity-wise, they would have known that and clearly information is out there,” he said. “The security at the tunnel and the additional police meant they didn’t get to the tunnel. Clearly there was a level of orchestrating behind the events we saw.”

Drivers using the port are growing increasingly nervous in the face of constant rock-throwing by migrants, as they battle with the 300 officers on duty at any one time. Drivers, who are also the targets of rock-throwing, say the migrants are all armed with knives and weapons of some kind.

“This will not end any time soon, it’s like a war zone and needs the army in to help control it. I do not want to be using the Calais port when heading back into the UK,” an anonymous driver told the Guardian.

“The police seem happier to allow the migrants to go to the UK so it’s not France’s problem,” he said.

“Drivers are unprotected. It’s not going to stop until [someone] is seriously hurt,” he said. “All you can do is lock the truck, but sitting in traffic means it’s easy to attack. It’s time for drivers to carry something to protect themselves.”

In fact, drivers have taken to social media to discuss ways of staying safe. Some have swapped tips recommending carrying fly spray or deep heat spray – pepper spray is illegal in the UK. Others are simply refusing to cross the Channel, limiting their employment options.

“This situation is now deteriorating by the day and we have received reports from members telling us that their drivers are being subjected to the most horrifying acts of violence and intimidation. These include physical attacks and threats from migrants wielding knives, hammers and baseball bats,” Mr Burnett said.

“We welcome the measures being taken to process migrants but it’s not happening fast enough. Current estimates are that despite 50 migrants being processed for resettlement on a weekly basis, these are replaced with another 150 each week.

“90 per cent of goods moving from mainland Europe to the UK are carried on the back of a truck and we are appalled that despite our pleas for action, nothing is being done to ensure that these trucks and, more importantly the drivers themselves, can complete their journey safely and securely.

“We need a firm commitment from government that it will push its EU counterparts to take action. We also need to know when an increase in security will be implemented.”

“This is not what our drivers signed up for.

“We are fully aware that the UK government is working with its EU counterparts to address the situation ‘at source’ but that will come as little comfort to the 5,000 HGV drivers that travel to the UK through Calais each day in fear for their lives.”