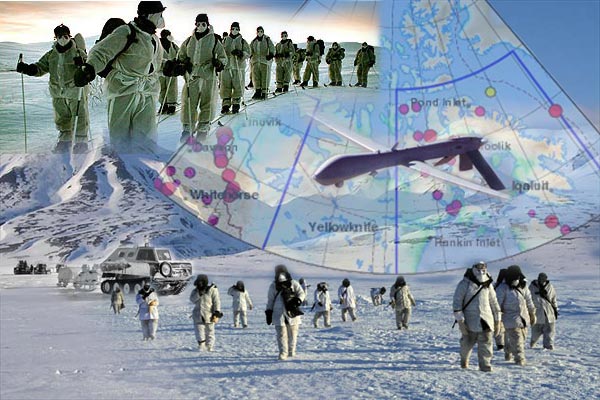 A small team of scientists is returning to the icy shores of the Northwest Passage this summer to install experimental listening devices that could one day keep a 24-hour watch for anything travelling on, over or under waters Canada claims as its own.

"We're looking at surface shipping and any underwater vehicles that may be moving through the area," says Lt.-Cmdr. Bruce Grychkowski, project manager of Northern Watch, which plans to plant a series of surveillance devices deep underwater at a choke point along the passage on the Barrow Strait.

Now in its third year, the Northern Watch program calls for the installation of a set of six different monitors at Gascoyne Inlet on Devon Island.

One sensor array will snake deep underwater 11 kilometres out to sea. Two others will track automatic identification broadcasts now mandatory on both large ships and planes.

A radar intercept system will detect the presence of navigational radar. A special Canadian-designed radar should be precise enough to detect small boats or icebergs.

Finally, an optical system will use laser and infrared imagers to peer across the icy waters to the far shore. A weather station will complete the project.

The devices will be left unmanned and will beam data up to an overhead satellite. In October, scientists in Halifax will begin a 12-month test to see how well the devices work in the harsh Arctic environment.

The sensors should give Canada a much better idea of who's using the Arctic than do current satellite scans, says Grychkowski.

Northern Watch "is looking at the same area all the time," he says. "A satellite will visit the area so many times a day."

Traffic in the passage is picking up as melting Arctic sea ice presents less and less of a hindrance.

Coast Guard figures show there were 62 commercial and re-supply ships and three ore carriers in the passage in 2008 - more than the 54 ships, including research and recreational vessels, that entered those waters four years earlier.

An increasing number of recreational sailors are also braving the legendary waterway.

Earlier this year, a Senate report recommended the government beef up control of the Northwest Passage by improving surveillance along it. That will also improve search and rescue capability in the area by giving searchers a definite point when and where vessels or aircraft were last seen, Grychkowski says.

"We have a starting point for search-and-rescue to start looking for them."

If all goes well, Grychkowski says a comprehensive surveillance system could be up and running by 2012.

It's about time, says Rob Huebert of the Centre for Military and Strategic Studies at the University of Calgary.

"I'm increasingly becoming convinced that we're seeing a substantial arms buildup in the Arctic," he says.

"The Arctic in general is becoming a busier place. It just is required that we know who's up there."

As well, the fact Northern Watch is Canadian technology will save the military from depending on U.S. willingness to share resources.

Northern Watch has its roots in the Cold War. Scientists from Defence Research and Development Canada first came to Gascoyne Inlet in the 1960s to study the possibility of installing an underwater listening device. Early underwater cables were destroyed by ice, so a pipe leading from shore was installed to protect them.

No devices were put in place, but the current Northern Watch program uses that same pipe installed decades ago.

Concerns over Arctic sovereignty revived the project. However, it suffered setbacks in 2008, when Arctic weather and ocean conditions left underwater sensors badly damaged. According to documents obtained by The Canadian Press under Access to Information laws, the project was also slowed by cost overruns and administrative delays.

"It is a very long process because we've already encountered some difficulty," says Grychkowski, who assumed responsibility for the project last August.

"The budget is not as large as it normally would be," he says.

The total budget for the project is about $10 million, documents say.

Still, when Northern Watch is complete, it will give Canada a unique eye on its Arctic flank.

"There is activity up there," says Grychkowski. "We are demonstrating we have the capability to do unmanned surveillance in an area that has the government of Canada's interest."