Christmas and the ancient winter festivals of light around the world

These days many people understand that "Christmas" represents the continuation and remake of the very ancient observation of the winter solstice, the time of year when the sun "dies" and is "reborn" or "resurrected," as the daylight hours decrease to their shortest point and then begin to increase again. This important solstice time has been observed most notably on December 21st or 22nd in the northern hemisphere. However, as we can see from the image below (click to enlarge), over the past several thousand years in many cultures globally the winter solstice has been celebrated at various times, from the middle or end of November to the middle of January. The symbolism in many of these instances is clear: Mourning the decrease and celebrating the increase of the sun’s life-giving light and heat. 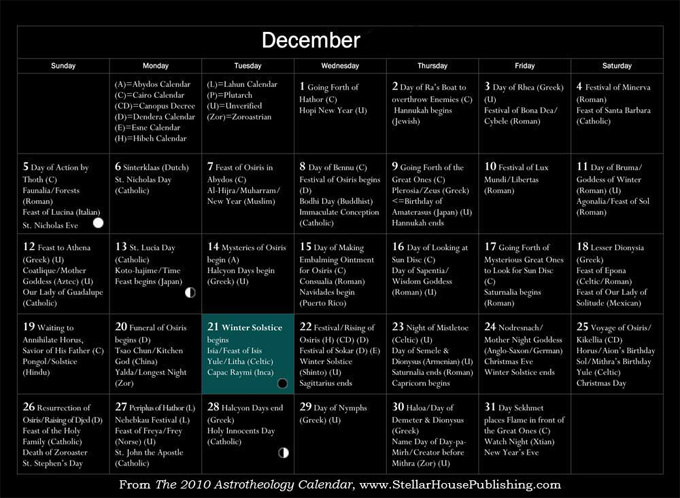 As can also be seen, this solstice transition was incorporated into mythology in numerous parts of the world, as the sun god or goddess has been represented frequently as emerging from a "cave," symbolizing the "underworld" or the place where the sun appears to go at night and during the winter months.

While it is clear that winter-solstice festivals of light have extended throughout the month of December, the winter celebration most people are familiar with is "Christmas," which occurs on December 25th, the transition from "Christmas Eve" on the 24th. This date is not a mistake or calendrical misalignment; indeed, it represents the end of a three-day period or triduum observed by the ancients as the sun’s "death" and entrance into the underworld, after which "he" is resurrected or reborn into the world. The ancients noticed that, for three days during this period, the sun’s shadow on the sundial remained in the same place (at noon); hence, it was believed that "he" had "died." Thus, according to this ancient perception the solstice period - "solstice" meaning "sun stands still" - begins at midnight on December 21st and ends at midnight on December 24th.

While hundreds of millions worldwide continue to be taught otherwise, it is well known these days in certain quarters, including among many Christian fundamentalists, that "Christmas" does not truly represent the birth of a historical Jesus Christ as the "real reason for the season." It is understood that this "Christian" celebration in actuality constitutes a remake of the birth of the sun instead, and it is contended that this "Pagan" winter-solstice festival was adopted into Christianity only in the third to fourth centuries after Christ’s alleged advent. 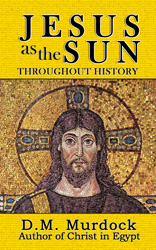 However, there are indications that this solar "birthday" of Jesus was already in the minds of the creators of Christianity long before that time, including comments by Church fathers, the biblical and traditional depiction of Christ as the "sun of righteousness," and an enigmatic verse in the Gospel according to John (3:30), put into the mouth of John the Baptist:

"He must increase, but I must decrease."

The original Greek of this scripture is:

. The first clause literally translates as, "That one it is necessary to cause to grow," while the second clause reads, "Me moreover it is decreasing." Thus, John 3:30 reads literally:

That one it is necessary to grow; me moreover it is decreasing.

Him it behoveth to increase, and me to become less...

This passage has been interpreted to mean that John the Baptist as a preacher must become less popular and lose his following, while Christ must increase in popularity, inheriting John’s following. Such a contention would remain odd, however, in that the speaker is clearly discussing not followers but a single person or object, with the "me" without a doubt referring to an individual, not a group or collective. The intent is clear that one must increase while the other must decrease, but how could this strange idea apply to a person? Was John the Baptist very fat, while Jesus was too thin?

Rather than representing the literal remark from a real person, this enigmatic verse is worded in such as way as to take on the appearance of mysteries - or, at least, mysterious - language or allegory. In consideration of the patent solar imagery sprinkled throughout the New Testament, along with the numerous characteristics Christ shares with solar heroes, such as the virgin birth, winter-solstice birthday, miracles of walking on water and turning water into wine, along with the transfiguration on the mount, resurrection and ascension into heaven, it is reasonable to suggest that this line represents the changing of the guard from the summer-to-winter sun (John) to the winter-to-summer sun (Jesus). This indication of Christ and the Baptist constituting representatives or personifications of the winter and summer solstices is validated by their respective birth or feast days on December 25th and June 24th.

The concept of the six months from summer to winter and from winter to summer representing important times can be found in Indian religion/mythology, in the doctrines and stories involving the uttarayana and dakshinayana, the six-month winter-summer and summer-winter periods beginning on the solstices. The uttarayana represents the "day of the gods," while dakshinayana symbolizes the "night of the gods." The uttaryana is said to be the period when the "gates to heaven" are open, and it is considered auspicious to die during this time, while the dakshinayana is the time when the heavenly gates are closed, and it is deemed unlucky to pass at this time. The enigmatic verse at John 3:30 about Christ needing to increase while John must decrease fits nicely with this Indian notion of the gates to heaven being open during this auspicious period and the gates closed during the unlucky time, especially since it is contended that Christ is the way to heaven. (E.g., John 14:6)

This notion of personified solstices or distinct solstitial periods also has precedence in other mythologies, such as the Egyptian, in which the gods Anubis and Osiris are said to be the personifications of the summer and winter solstices, respectively. Among other similarities, both Anubis and John are depicted as headless and as purifying or baptizing the god or godman who saves the worshipper from death and promises eternal life, leaving us to wonder whether or not John the Baptist is an Egyptian myth.

John and Jesus as remakes of Anubis and Osiris

In the case of Anubis and Osiris, the strange line, "He must increase, while I must decrease" would be appropriate, in consideration of their role as personifications of the summer and winter sun and solstices. In this regard and for many other reasons, the gospel of John, in which this verse may be found (3:30), is obviously geared toward an Egyptian audience, having also its apparent provenance in Egypt, where the earliest fragments of the book were discovered. Hence, the connection between this biblical verse and the winter-summer transition becomes even more logical to assume. It would therefore seem that the writer(s) of John’s gospel - which does not appear in the literary record until the end of the second century - were aware already at this time of the identification of Jesus Christ with and as the sun, as they should be, since the coming messiah is specifically called "Sun of Righteousness" in the Old Testament book just before the Gospel of Matthew, Malachi (4:2). 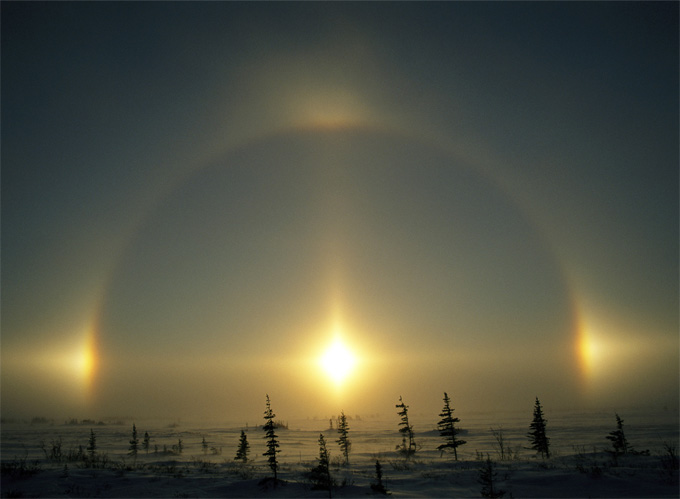 Rather than representing the birthday of a human savior of a particular ethnicity and creed, this time of the year constitutes the "birth," "rebirth" or "resurrection" of Sol Invictus, the "Unconquered Sun," whose annual journey across our sky can be celebrated worldwide as a truly unifying expression of our global family.

For more information, see my books and my DVD: Great Minds of Our Times.