Russian Beacon satellite set to light up the night sky: 'Artificial star' would reflect sunlight to illuminate parts of Earth

The brightest star in the night sky is Sirius, known as the 'dog star' or Alpha Canis Majoris.

But that could be about to change if a crowdfunded project in Russia takes off as planned later this year.

Called the 'Mayak' or 'Beacon' project, engineers are hoping to launch a satellite that will become the brightest object in our skies, apart from the sun, thanks to a giant reflective sheet of material. 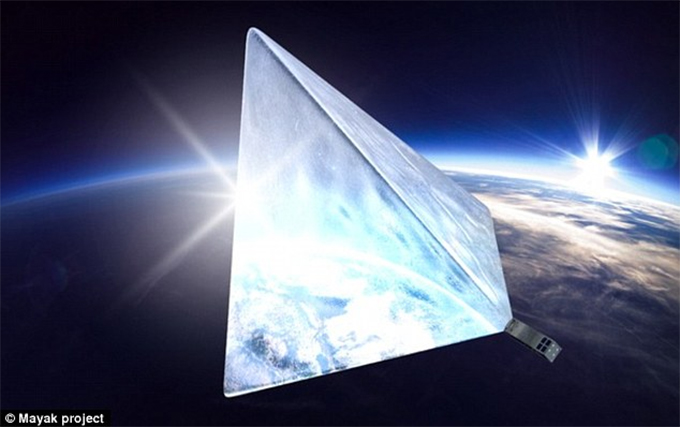 Engineers on the the 'Mayak' or 'Beacon' project are hoping to launch a satellite (illustrated) that will become the brightest object in our skies, apart from the sun, thanks to a giant reflective sheet of material.

The launch is scheduled for the summer and is expected to be taken up in a Soyuz 2 rocket, with help from Roscosmos, the Russian space agency.

The team is planning to place the spacecraft in a sun-synchronous orbit 370 miles (600km) above the ground.

The small spacecraft will launch a giant pyramid-shaped solar reflector in orbit.

The reflector is 170 square feet (16 square metres) in size and made of a thin polymer film 20 times thinner than human hair.

The aim of the project is to promote space research in the country, and to make science and engineering more appealing to young Russians.

The satellite itself won't serve a particular purpose, other than to prove what can be possible in the field.

A previous proposal, which involved attaching a reflective panel of plastic to a cargo ship heading to the Mir space station, was designed to see if orbiting mirrors could illuminate cities or other parts of Earth by reflecting sunlight.

The idea was that the mirrors could extend daylight hours for farmers, for example, reports Ars Technica.

The Mayak project team recently announced it has raised enough money to undergo the next stage of the rocket's testing. 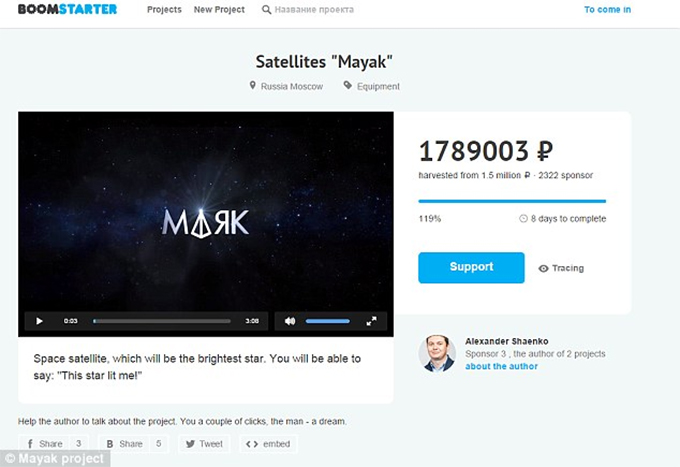 'We are sending a spacecraft into orbit that will be the brightest star in the sky, visible from any point on our planet,' project leader Alexander Shaenko, head of the modern cosmonautics course at Moscow State University of Mechanical Engineering.

'We want to show that space exploration is something exciting and interesting, but most importantly that today it is accessible to everybody who is interested.'