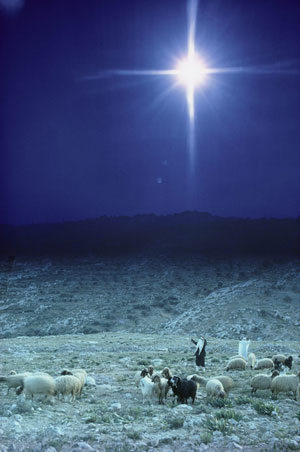 In the Bible, a celestial beacon now known as the Star of Bethlehem led the Magi, or wise men, to Jesus's manger.

Astronomers have been debating for centuries whether the star existed and, if so, what it might have been. Comets, meteor showers, and supernovae have all been proposed, but in recent years two main theories have come to dominate the discussion.

The first relates to a singular planetary gathering, or conjunction, of the bright planets Venus and Jupiter. A particularly striking conjunction occurred in June 17, 2 B.C.

It makes for a probable Christmas star, some astronomers say, because the two bright planets appeared so close in the evening sky that they would have seemed to merge.

"There is no doubt that for skywatchers at the time it looked like a massive, single starlike object in the western evening sky," said Ed Krupp, director of the Griffith Observatory in Los Angeles, California.

(Venus and Jupiter were also in conjunction this December.)

But serious questions linger as to whether this date could really signify Jesus's birth.

"There is considerable ambiguity about the exact date of birth of Christ. There is no authoritative record to establish that," said Marvin Bolt, director of the History of Astronomy Department at the Adler Planetarium in Chicago, Illinois.

A Celestial Series
But those who study the historical and theological aspects of astronomy see the Christmas Star story as a much more elaborate event.

"Astronomers today are looking for a spectacular event in the sky that modern tools and technologies are able to pinpoint, but they are completely missing the cultural impact and importance of the story itself," said Bolt.

Bolt supports an alternative theory that a complex series of celestial alignments between the Moon, Jupiter, and a particular group of stars—all of which had deep meaning to astrologer-astronomers at the time—added up to create the legend.

The sequence of celestial events began in April of 6 B.C., starting with Jupiter positioning itself in the constellation Aries. Over the following months, Jupiter was also twice in close conjunction with Earth's moon, and paired up with Saturn.

Aries was considered the sign of the Jews, and Jupiter's movements in the sequence carried the meaning of conferring kingship.

Planetariums Align
The conjunction theory is strictly astronomical in nature, while the more nuanced approach attempts to peer into the minds of ancient skywatchers.

"It's not a matter of looking at astronomical events we today would find striking. You have to look at what people 2,000 years ago might have thought was significant to their lives," Bolt said.

While the newer theory is more plausible, said the Griffith Observatory's Krupp, it will take some time for it to take hold in the astronomical community.

But some planetariums have been changing their traditional "Star of the Magi" shows to incorporate this alternate historical interpretation of the nativity story.

"Many planetariums have even scrapped their old shows entirely and are putting forward an account that is based on this new theory," Bolt said.

"At this point if we want to find out what really happened 2,000 years ago, we need to have ... confirmation that refers to the birth of Christ—something that clearly demonstrates that this person was born at a particular date and time," he said.