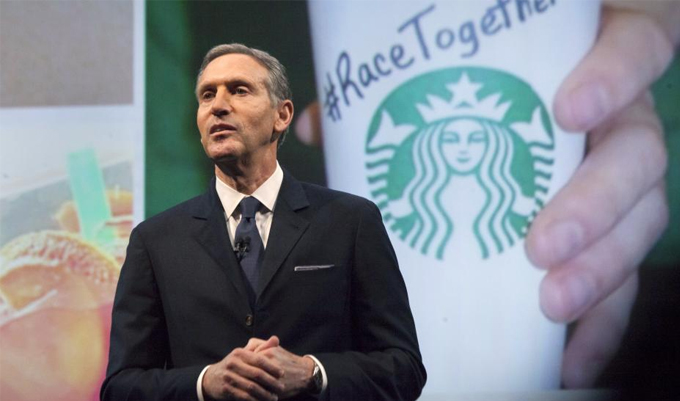 Howard D. Schultz, the chief executive of Starbucks, said in a letter to employees on Sunday that baristas would no longer be encouraged to write the phrase “Race Together” on customers’ coffee cups, drawing to a close a widely derided component of the company’s plan to promote a discussion on racial issues.

“While there has been criticism of the initiative — and I know this hasn’t been easy for any of you — let me assure you that we didn’t expect universal praise,” Mr. Schultz wrote.

Having baristas write on customers’ cups, Mr. Schultz wrote, “which was always just the catalyst for a much broader and longer-term conversation — will be completed as originally planned today, March 22.”

That end date had not previously been mentioned publicly, including during Mr. Schultz’s discussion of the initiative at the company’s annual shareholders meeting last week, but a company spokeswoman, Laurel Harper, said employees had been told about it.

Asked whether Starbucks was reacting to criticism, Ms. Harper said, “That is not true at all. When we initially began the Race Together initiative, what we wanted to do is spark the conversation, because we believe that is the first step in a complicated issue.”

She added, “Leading change isn’t an easy thing to accomplish.”

The initiative, which began last week, was mocked with such vehemence on social media that the company’s senior vice president for global communications deleted his Twitter account because, as he wrote on Medium, he felt “personally attacked in a cascade of negativity.”

Some critics said that Starbucks might look first to its own executive team, which they suggested was considerably less diverse than lower-paid staff. Others felt that a coffee company should not foist such discussions on customers.

“I’ll have a flat white,” read one cartoon, referring to an espresso drink the company has recently started serving. “No racism intended.”

But the broader initiative, Mr. Schultz wrote Sunday, “is far from over.”

More open forums are planned, Mr. Schultz wrote, and three special sections in USA Today focusing on racial issues are to appear over the next year, along with “more open dialogue with police and community leaders in cities across our country, a continued focus on jobs and education for our nation’s young people.”

Starbucks has also committed, he said, to hiring “10,000 opportunity youth over the next three years” and expanding its store footprint in “urban communities.”

The criticisms, Ms. Harper said, have not dented Starbucks’ determination. “This is who we are,” she said. “Our mission is to inspire and nurture the human spirit, one person, one cup and one neighborhood at a time. We know that we don’t have all the solutions and the answers, but for us, doing nothing makes us part of the problem.”