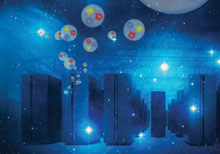 The standard model of physics got it right when it predicted where the mass of ordinary matter comes from, according to a massive new computational effort. Particle physics explains that the bulk of atoms is made up of protons and neutrons, which are themselves composed of smaller particles known as quarks, which in turn are bound by gluons. The odd thing is this: the mass of gluons is zero and the mass of quarks [accounts for] only five percent. Where, therefore, is the missing 95 percent?

The answer, according to theory, is that the energy from the interactions between quarks and gluons accounts for the excess mass (because as Einstein’s famous E=mc² equation proved, energy and mass are equivalent). Gluons are the carriers of the strong nuclear force that binds three quarks together to form one proton or neutron; these gluons are constantly popping into existence and disappearing again. The energy of these vacuum fluctuations has to be included in the total mass of the proton and neutron]. The new study finally crunched the numbers on how much energy is created in these fluctuations and confirmed the theory, but it took a supercomputer over a year to do so.

The theory that describes the interactions of quarks and gluons is known as quantum chromodynamics, or QCD. These exchanges bind quarks together by changing a quark property known as color charge. This charge is similar to electric charge but comes in three different types, whimsically referred to as red, green and blue. Six different types of quarks interact with eight varieties of gluons to create a panoply of elementary particles. Calculating these interactions was a massive task, as researchers explain in an article in Science, The team used more than a year of time on the parallel computer network at Jülich, which can handle 200 teraflops - or 200 trillion arithmetical calculations per second.

But what, you may be saying, of the Higgs boson? The Higgs is often mentioned as an elusive particle that endows other particles with mass, and the Large Hadron Collider will search for it when it starts up again next year. But the Higgs is thought to explain only where the mass of the quarks themselves comes from. The new work confirms that the mass of the stuff around us is due only in very small part to the masses of quarks themselves. Most of it comes from the way they interact.