Copenhagen accord was a "disaster", says Sweden

Dec 22, 2009 Source: reuters.com
Sweden described the Copenhagen climate change summit as a "disaster" and a "great failure" on Tuesday, ahead of a meeting of European Union environment ministers to discuss how to rescue the process. 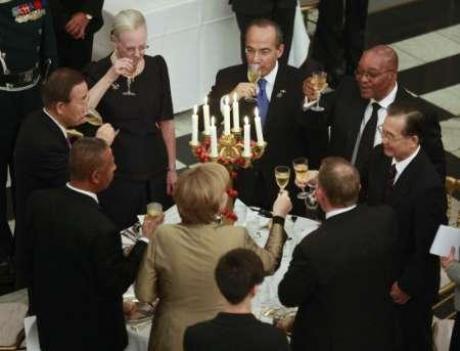 The European Union went to Copenhagen with the hope of achieving a broad commitment to at least a 20-percent cut in carbon emissions below 1990 levels within 10 years, but that and other firm goals failed to emerge in the final accord.

"Ministers are going to meet today to discuss, of course, how to proceed after this disaster we really had in Copenhagen," Swedish Environment Minister Andreas Carlgren told reporters as he and other ministers gathered for the meeting in Brussels.

Carlgren will chair the talks as Sweden currently holds the EU presidency.

"I expect us to discuss both how to continue ... but also elaborate on possibilities for alternate ways to work now, because it was a really great failure and we have to learn from that."

The two-week, U.N.-led conference ended on Saturday with a non-legally binding agreement to limit global warming to a maximum of 2 degrees Celsius over pre-industrial times, but did not lay out how to achieve that.

Despite months of preparation and strenuous international diplomacy, the talks boiled down to an inability of the world's two largest emitters, the United States and China, to agree on headline fixed targets.

The 27 member states of the EU had gone into the talks with a unified position and with a plan for financing emissions cuts in the developing world, with a commitment to spend around 7 billion euros ($10.01 billion) over the next three years to aid poorer countries.

But those aims were largely sidelined as the talks failed to produce the breakthrough agreement many had hoped for.

"Europe never lost its aim, never, never came to splits or different positions, but of course this was mainly about other countries really (being) unwilling, and especially the United States and China," said Carlgren.

Britain on Monday blamed China and a handful of other countries of holding the world to ransom by blocking a legally binding treaty at Copenhagen, stepping up a blame game that has gathered momentum since the talks ended.

Prime Minister Gordon Brown described the summit as "at best flawed and at worst chaotic" and demanded an urgent reform of the process to try to reach a legal treaty when talks are expected to resume in Germany next June.

But Danish Climate Minister Connie Hedegaard, who quit as president of the Copenhagen talks midway through after being criticized by African countries for favoring wealthier nations in negotiations, said it was no time to get depressed about the process of tackling climate change.

"What we need to do is to secure the step that we took and turn it into a result," she told reporters as she arrived for the Brussels meeting on Tuesday. Asked whether Copenhagen had been a failure, she replied:

"It would have been a failure if we had achieved nothing. But we achieved something. A first step. It was the first time we held a process where all the countries were present, including the big emitters."