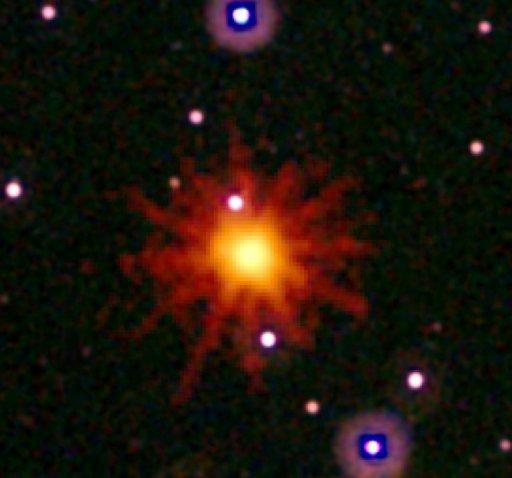 This NASA image from Swift’s Ultraviolet/Optical (white, purple) and X-ray telescopes (yellow and red) were combined in this view of a cosmic burst at the center of distant galaxy that has burned for more than a week, longer than astronomers have ever seen before, the US space agency said. NASA

NASA is studying a surprising cosmic burst at the center of distant galaxy that has burned for more than a week, longer than astronomers have ever seen before, the US space agency said Thursday.

Calling it "one of the most puzzling cosmic blasts ever observed," NASA said it has mobilized the Hubble Space Telescope along with its Swift satellite and Chandra X-ray Observatory to study the phenomenon.

"More than a week later, high-energy radiation continues to brighten and fade from its location," NASA said in a statement.

"Astronomers say they have never seen such a bright, variable, high-energy, long-lasting burst before. Usually, gamma-ray bursts mark the destruction of a massive star, and flaring emission from these events never lasts more than a few hours."

The first in a series of explosions was detected by a NASA telescope on March 28 in the constellation Draco.

Astronomers think the the blast occurred "when a star wandered too close to its galaxy’s central black hole," NASA said.

"Intense tidal forces probably tore the star apart, and the infalling gas continues to stream toward the hole. According to this model, the spinning black hole formed an outflowing jet along its rotational axis. A powerful blast of X- and gamma rays is seen when the jet is pointed in our direction."

On April 4, the Hubble telescope spotted the source of the explosion at the center of a galaxy 3.8 billion light-years away from Earth.

"We have been eagerly awaiting the Hubble observation," said Neil Gehrels, the lead scientist for Swift at NASA’s Goddard Space Flight Center in Greenbelt, Maryland.

"The fact that the explosion occurred in the center of a galaxy tells us it is most likely associated with a massive black hole. This solves a key question about the mysterious event."

The Swift telescope has catalogued the event as gamma-ray burst (GRB) 110328A, alerting worldwide astronomers to its existence for further study.