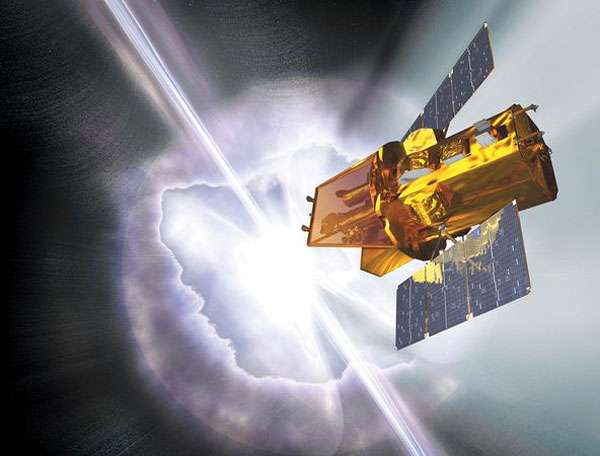 A flash of light that likely signaled the birth of a black hole was so bright it briefly blinded a NASA telescope—even though the light came from five billion light-years away.

From its orbit around Earth, the Swift telescope has been scanning the skies since 2004 for mysterious, ultrabright flashes known as gamma-ray bursts.

Gamma rays are the most energetic forms of light, which means they're capable of penetrating even denser chunks of matter than x-rays, noted Swift lead scientist David Burrows. Because of this, we can see gamma rays that have traveled from sources at very edges of the observable universe.

(See a picture of a gamma-ray burst that was visible to the naked eye.)

About once a day somewhere in the sky there’s a brilliant burst of gamma rays. Astronomers think these bursts happen when the cores of very massive, dying stars collapse, generating powerful explosions and giving rise to new black holes.

Swift was designed to look for these bright events and study the initial flash of gamma rays and high-energy x-rays as well as the "afterglow" of lower-energy x-rays and ultraviolet light. Even though it can’t scan the whole sky at once, the telescope typically finds about two gamma-ray bursts a week.

But on June 21 a rush of light from a minute-long gamma-ray burst proved so overwhelming that Swift’s data processing software temporarily shut down.

"This thing was so bright it completely saturated the detectors," said Burrows, who is also a professor of astronomy and astrophysics at Penn State University.

Swift "wasn’t hurt or anything. But the software on the ground thought something was wrong with the data and threw it out. We didn’t catch what happened for almost a week."

Luckily Swift team member Phil Evans, a postdoctoral researcher at the U.K.’s University of Leicester, went back through the scrapped data and discovered the burst’s true power.

Until now, scientists thought the brightest gamma-ray bursts sent out a maximum of 10,000 x-ray photons a second.

But at its peak, the newfound burst sent out 145,000 photons a second, Burrows said—making this gamma-ray burst 10 to 15 times brighter than anything previously seen by Swift’s x-ray telescope.

"We've spent a lot of time over the past couple weeks trying to figure out if there was some kind of mistake," Burrows said. "But as far as we can tell, this is correct."

Now the scientists are puzzling over what could have caused this particular burst to be a record setter.

What they do know is that the light must be coming from very close to the newborn black hole, which must be a relatively small object.

"You can't get a large object flickering this quickly. It would have to be something very small and compact," Burrows said.

Bright Bursts Can Be Cosmic Lighthouses

The blinding oddity adds a new wrinkle to future plans to use gamma-ray bursts to study the origins of the universe.

One mission in the works, dubbed Xenia, proposes to use the bursts like beams from cosmic lighthouses, looking not at a burst itself, but at the distant dust and gases briefly illuminated by the explosion.

Using light from a gamma-ray burst, "we can measure the properties of gases between us and the burst and get information on the material in the very early history of the universe," Burrows said.

The newfound burst, he said, means that Xenia mission designers will have to go back to the drawing board to make sure the probe will be able to handle the brightest flashes the universe can dish out.