Davos 2013: Green Governance To ’Save the World’ 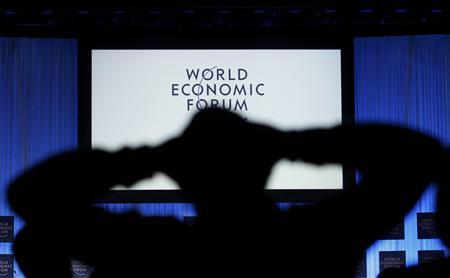 The World Economic Forum held in Davos, Switzerland annually since 1971 self-describes on their website as "independent international organization committed to improving the state of the world by engaging business, political, academic and other leaders of society to shape global, regional and industry agendas."

In practice, world leaders of business, banking, and politics gather behind closed doors and cement plans to benefit their interests while publicly celebrating their opportunistic solutions as global salvation.

In 2013 this body will meet once again in Switzerland from the 23rd to 27th of January not only to discuss economics, but also to address financial crises, environmental challenges, and global government. Public opinion on such matters is obviously not wanted or accepted.

The WEF is a ’non-profit’ organization which claims to have "no political, partisan or national interests", but if you’re discussing plans to change global financial structures, encourage increased governance, and implement a worldwide ’green’ economy, politics and special interests play a role in this, and always have.

Indeed, it is reported:

The annual meeting has also been decried as a "mix of pomp and platitude", and criticized for moving away from serious economics and accomplishing little of substance, particularly with the increasing involvement of NGOs that have little or no expertise in economics. Instead of a discussion on the world economy with knowledgeable experts alongside key business and political players, the annual meeting now features the top media political causes of the day, such as global climate change and AIDS in Africa

Like other shadowy meetings attended by the extremely wealthy and powerful ’superclass’ such as Bilderberg Group and Trilateral Commission, Davos has come under fire in the past for the manipulation by the global elite, and protests are held annually outside the event. Strict security measures now keep protests far away from the meetings, and protests are held in cities like Zurich or Bern - far enough away so as not to disturb the ’civilized’ ambiance and the elite lamenting "the rising power of the Internet and expanded possibilities for public input."

"More than 2,500 business executives and bankers will converge on the highest town in Europe for the annual World Economic Forum. For the next five days, Davos will, it’s safe to say, boast more millionaires per square foot than anywhere else on the planet. A guest list leaked on to the web this weekend included 680 company chief executives, and a plethora of bankers: seven from Citigroup alone, six each from Goldman Sachs, JP Morgan and Deutsche Bank. David Cameron is on the list, along with 36 other sitting prime ministers. Naturally, Tony Blair and Gordon Brown are both popping in

And this is what makes Davos so fascinating: it is the most perfect case study of how the practitioners of free-market, globalised capitalism give the public one explanation for what they are doing and why, while privately pursuing the complete opposite. On the one hand there is an event attended by Sharon Stone, Bono and a slew of tame academics (14 Nobel laureates this week alone), the message being "we’re open to anyone". On the other hand, there are those secret meetings, off limits to anyone not in the £100k club. It is both a reputation-laundry service, and the most shadowy backroom-dealing house. "

Political critic Noam Chomsky has condemned WEF, and "characterized the term ’globalization’ as propaganda as used in connection with trade policies advanced by the World Economic Forum":

The dominant propaganda systems have appropriated the term ’globalization’ to refer to the specific version of international economic integration that they favor, which privileges the rights of investors and lenders, those of people being incidental. In accord with this usage, those who favor a different form of international integration, which privileges the rights of human beings, become ’anti-globalist.’ This is simply vulgar propaganda, like the term ’anti-Soviet’ used by the most disgusting commissars to refer to dissidents. It is not only vulgar, but idiotic. 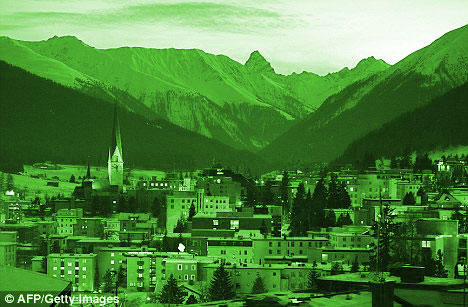 In 2013, the biggest push by the WEF is towards a ’green’ global economy, with an estimate price tag of 14 trillion dollars:

Only a sustained and dramatic shift to infrastructure and industrial practices using low-carbon technology can save the world and its economy from devastating global warming, according to a Davos-commissioned alliance led by the former Mexican President, Felipe Calderon, in the most dramatic call so far to fight climate change on business grounds.

This includes everything from power generation, transport, and buildings to industry, forestry, water and agriculture, according to the Green Growth Action Alliance, created at last year’s Davos meeting in Mexico.

The extra spending amounts to roughly $700bn a year until 2030 and would provide a much-needed economic stimulus as well as reduce the costs associated with global warming further down the line, said Mr Calderon, who leads the alliance.

It is better to try to pre-empt events like Hurricane Sandy, which cost $50bn, by keeping a lid on global warming, concluded the report, researched by the Accenture consultancy.

It will have to be seen if ’pre-emptive’ strategies involve the controversial (and until recent history, unacknowledged) global geo-engineering and ’climate intervention’ techniques such as atmospheric seeding, carbon dioxide removal, solar radiation management, iron fertilization, etc. Perhaps it will mean punitive carbon taxes and fines, restrictions on business, travel, and personal freedoms, or global population control.

The WEF suggests a crisis of leadership and debt are some of the biggest challenges facing the world, and that ’global governance’ is the key to stabilization. Pascal Lamy, director-general of the World Trade Organisation, said: ‘We need proper global governance that has the necessary tools, power and energy to create a more level playing field at the international level.’

At the end of the day, a push for increased global governance and an environmental agenda is on the table for Davos 2013, under the banner of ’Resilent Dynamism’:

Either attribute - Resilience or Dynamism - alone is insufficient, as leadership in 2013 will require both".

You Can Save The World

Because the Davos governing class has insulated itself from public opinion, the actual changes to government, environment, and economies may well hit a wall during attempts to implement changes on the ground. It will indeed require ’bold vision and bolder action’ on the part of concerned citizens to ensure rights and freedoms are not stripped away with the tools of fear, control, secrecy, power, and money.

To phrase it another way:

"Either attribute - Resistance or Discernment - alone is insufficient, as leadership in 2013 will require both".

What REALLY Matters to the elite at Davos: Shiny Badges