Dead zones: Places where no animal can survive found in Atlantic Ocean 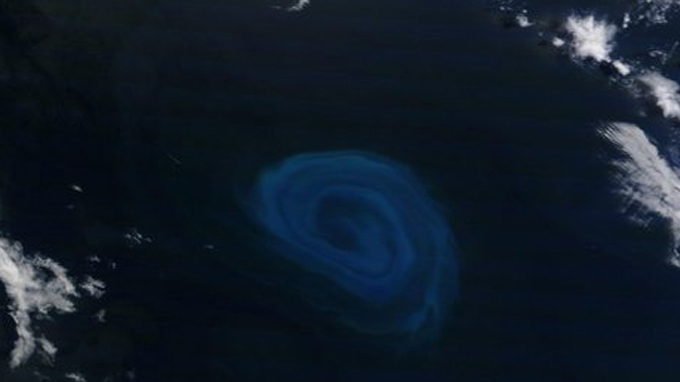 A team of German and Canadian marine biologists have for the first time ever witnessed so-called ‘dead zones’ in the Atlantic Ocean – places where no life can thrive, owing to there being almost no dissolved oxygen in the water.

Zones depleted of oxygen do exist in nature and have previously been discovered along populated coastal areas off the eastern and southern coasts of the United States and the Baltic Sea. But this is the first time such a place has been observed in the open ocean.

In a paper published in the journal Biogeosciences, researchers outline the existence of pockets of low-oxygenated patches of water in the Atlantic Ocean.

They are vast – sometimes 100 square miles in size. They travel constantly and are also seasonal. One of the biggest ever discovered forms each year in the Gulf of Mexico.

What makes these things tick is a hodge-podge of nutrients and microbes delivered from elsewhere. It’s a cyclical process: the nutrients are food for algae blooms, which in turn get devoured by microorganism. This creates waste, which is then eaten by other microbes. This process uses up a lot of oxygen, creating oxygen-free pockets.

The nutrient run-off here is a means of transportation. But if you’re an animal or fish, there are only two options: moving and surviving, or staying and dying.

Dead zones are normally found in shallow water, where not a lot of mixing takes place. The Atlantic Ocean is obviously very different, which creates a puzzle.

Researchers found that these particular dead zones masquerade as ‘eddies’ – basically huge underwater ocean cyclones that spin into a vortex, practically no different to how weather sometimes acts above ground. They can twist uninterrupted for months on end. The spinning vortex creates a wall around the central core – a process, which quickly depletes oxygen from it, and so, a dead zone is born.

“The fast rotation of the eddies makes it very difficult to exchange oxygen across the boundary between the rotating current and the surrounding ocean. Moreover, the circulation creates a very shallow layer – of a few tens of meters – on top of the swirling water that supports intense plant growth,” study author Johannes Karstensen of the University of Bremen says in the press release of the journal of the European Geosciences Union (EGU).

What surprised him and the team was that the levels of oxygen depletion found previously in dead zones were way off: before the study, common estimates put dissolved oxygen at around 1 milliliter per liter of seawater. Karstensen and team though found the lower end of the spectrum in the Atlantic to contain only 0.3 milliliters.

The intensity of the phenomena is dependent upon the speed of the eddy, chemical concentration, weather patterns and the Earth’s rotation.

The researchers worry that the existence of dead zones even at the center of the Atlantic could have an effect on people living on land, particularly in Cape Verde.

“Given that the few dead zones we observed propagated less than 100 kilometers north of the Cape Verde archipelago, it is not unlikely that an open-ocean dead zone will hit the islands at some point," Kartsensen explains. "This could cause the coast to be flooded with low-oxygen water, which may put severe stress on the coastal ecosystems and may even provoke fish kills and the die-off of other marine life.”