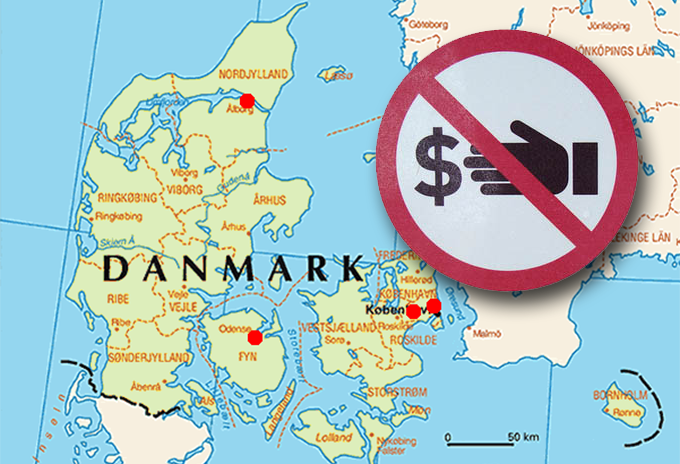 Denmark is on track to become the world's first cashless nation, with its government pushing to free some stores, restaurants and petrol stations from accepting cash payments.

The proposal to scrap cash transactions is part of a package of cost-saving measures being introduced ahead of the Danish election in September, the Independent reports.

It is understood the government is hoping to get rid of the option to pay by cash by as early as 2016.

Nearly a third of all Danish citizen prefer to use Danske Bank’s official app, MobilePay, to pay for services and transactions, and it is expected that the proposal will be met with little opposition.

Financial institution lobbyist Finansraadet said that going cashless would save retailers money on security, in addition to time when counting money at closing of business day.

The Danish Chamber of Commerce (Dansk Erhverv) also supported the move, saying it was time shops were given the option of going cash-free.

“Society has changed so much that there is no longer a need for requirements on cash payments,” spokesman Henrik Hytolft told broadcaster DR.

“Plus, cash has become tremendously expensive to handle due to security reasons.”

However, there are fears that with electronic transactions, the risk of fraud will also rise. Opponents ahve cited the case of Sweden — a country with the highest number of bank transactions per person in the European Union — where fraud has doubled in the past 10 years.

Last year, Juniper Research forecast that smartphone payments would hit 9.9 billion by 2018, with one in five phones acting as digital wallets.

The technology is already available in Australia, though banks, businesses and PayPal are paving the way individually, making it more difficult to understand.

Other digital pay options such as Google Wallet, Apple’s Passbook and England’s Paym are starting to become more commonplace, with experts predicting that Nordic nations could become cashless by 2030.