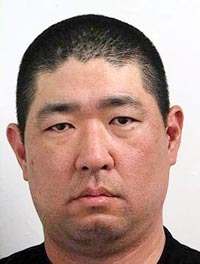 James J. Lee, who was protesting what he said was the network’s promotion of overpopulation, was fatally shot by police after taking three people captive at the company headquarters in Maryland.

A law enforcement official speaking on condition of anonymity because the investigation was ongoing said authorities had identified James J. Lee as the likely suspect.

Lee, 43, who was upset with the channel over its programming, entered the building about 1 p.m., wielding a gun and wearing "explosive devices," and took a security guard and two other employees hostage, police said. The rest of the company’s nearly 1,900 employees were evacuated from the building.
After several hours of telephone negotiations, Lee pulled out his gun and pointed it at one of the hostages, police said. Tactical officers then took aim at Lee, killing him. It was unclear whether Lee had been able to fire his gun, but all three hostages were able to escape safely, according to officials.

"I know that he had some history with folks at Discovery Channel," Montgomery County Police Chief J. Thomas Manger said at a news conference after the shooting. 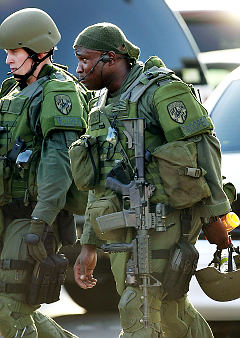 Maryland state troopers walk near the scene of the standoff. Ceneta/AP
According to electronic court records, Lee was charged with disorderly conduct in 2008 and served 46 days in jail for a protest he staged in front of the channel’s headquarters. He said he was protesting that Discovery’s programming had little to do with saving the planet.

"He didn’t think we were environmentally sound," said David Leavy, a spokesman for Discovery Communications, adding, "there had not been any communication from him in the last couple of years."

A lengthy posting that could be seen Wednesday on a website registered to Lee expressed anger against the Discovery Channel and said it promoted overpopulation, according to a report from the Associated Press.

He said the network and its affiliates should stop "encouraging the birth of any more parasitic human infants." Instead, he said, it should air "programs encouraging human sterilization and infertility."

"NO MORE BABIES! Population growth is a real crisis," he wrote.

"I want Discovery Communications to broadcast on their channels to the world their new program lineup and I want proof they are doing so," he wrote. "I want the new shows started by asking the public for inventive solution ideas to save the planet and the remaining wildlife on it."

TLC is perhaps the most recognizable in the large-family genre of reality television with its one-time flagship series "Jon & Kate Plus 8," which at its peak garnered 10 million viewers. Its spin-off, "Kate Plus 8," premiered with 3.4 million viewers in June.

TLC’s other bountiful brood includes The Duggar family in "19 Kids and Counting." The network has also aired "Table for 12," and "Kids by the Dozen," which featured a number of families with 13 to 16 children each.