Do We Live in the Matrix?

Tests could reveal whether we are part of a giant computer simulation — but the real question is if we want to know... 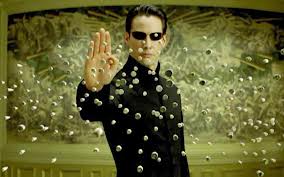 In the 1999 sci-fi film classic The Matrix, the protagonist, Neo, is stunned to see people defying the laws of physics, running up walls and vanishing suddenly. These superhuman violations of the rules of the universe are possible because, unbeknownst to him, Neo’s consciousness is embedded in the Matrix, a virtual-reality simulation created by sentient machines.

The action really begins when Neo is given a fateful choice: Take the blue pill and return to his oblivious, virtual existence, or take the red pill to learn the truth about the Matrix and find out “how deep the rabbit hole goes.”

Physicists can now offer us the same choice, the ability to test whether we live in our own virtual Matrix, by studying radiation from space. As fanciful as it sounds, some philosophers have long argued that we’re actually more likely to be artificial intelligences trapped in a fake universe than we are organic minds in the “real” one.

But if that were true, the very laws of physics that allow us to devise such reality-checking technology may have little to do with the fundamental rules that govern the meta-universe inhabited by our simulators. To us, these programmers would be gods, able to twist reality on a whim.

So should we say yes to the offer to take the red pill and learn the truth — or are the implications too disturbing?

Worlds in Our Grasp

The first serious attempt to find the truth about our universe came in 2001, when an effort to calculate the resources needed for a universe-size simulation made the prospect seem impossible.

Seth Lloyd, a quantum-mechanical engineer at MIT, estimated the number of “computer operations” our universe has performed since the Big Bang — basically, every event that has ever happened. To repeat them, and generate a perfect facsimile of reality down to the last atom, would take more energy than the universe has.

“The computer would have to be bigger than the universe, and time would tick more slowly in the program than in reality,” says Lloyd. “So why even bother building it?”

But others soon realized that making an imperfect copy of the universe that’s just good enough to fool its inhabitants would take far less computational power. In such a makeshift cosmos, the fine details of the microscopic world and the farthest stars might only be filled in by the programmers on the rare occasions that people study them with scientific equipment. As soon as no one was looking, they’d simply vanish.

In theory, we’d never detect these disappearing features, however, because each time the simulators noticed we were observing them again, they’d sketch them back in.

That realization makes creating virtual universes eerily possible, even for us. Today’s supercomputers already crudely model the early universe, simulating how infant galaxies grew and changed. Given the rapid technological advances we’ve witnessed over past decades — your cell phone has more processing power than NASA’s computers had during the moon landings — it’s not a huge leap to imagine that such simulations will eventually encompass intelligent life.

“We may be able to fit humans into our simulation boxes within a century,” says Silas Beane, a nuclear physicist at the University of Washington in Seattle. Beane develops simulations that re-create how elementary protons and neutrons joined together to form ever larger atoms in our young universe.

Read the full article at: discovermagazine.com

Jim Elvidge - The Singularity Will Not Occur, Programmed Reality & Infomania

Anthony Peake - Hour 1 - The Infinite Mindfield: The Mystery of Consciousness

Sophia Stewart & Ed Small - Mother of The Matrix & The Terminator