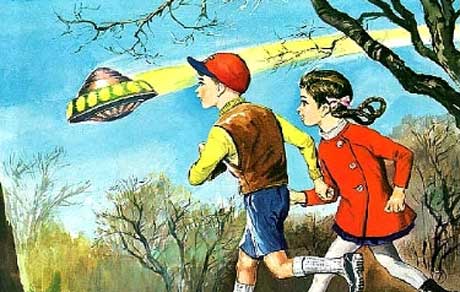 If a space ship touched down
In my yard I would run
Right towards it, yelling
"Greetings, let's go have some fun!" - Arthur's Songbook

On the evening of September 27 in the village of Premanon during France's seriously weird year of 1954, a 12-year old named Raymond Romand stepped out of his farmhouse and immediately saw in the yard an apparent humanoid entity "as tall as a door, and shiny, like a wardrobe with a mirror."

It approached Raymond and gently touched him, and he fell to the ground terrified. His nine-year old sister Janine and two other children, who had followed him outside to play, now saw it too. The entity moved away, and Raymond, encouraged by the presence of others, began throwing stones as it left. One sounded as though it struck something metallic. The entity left the yard for a downhill pasture, where the children observed it enter an object they described as a "ball of fire," which soon ascended into the sky.

The children knew their parents and their community well enough to realize this was something best kept to themselves. But the next day at school Raymond told a friend, who told others. When it was overheard by a teacher she called the police. At the spot of the "ball of fire," officers from Saint Claude and Les Rousses found four triangular indentations in the ground and a clearly defined area of compression 12-feet in diameter with grass heavily flattened, like a pinwheel, in a counterclockwise fashion. "In addition," Jacques Vallee writes in Challenge to Science, "a pole fence had been grazed and the bark of a pine tree was scorched five feet above the ground."

But to me, the most interesting aspect of the story is the reaction of Raymond's mother:

Throughout this investigation, Mrs Romand displayed a very strange attitude. She seemed deeply shocked by the whole affair and reluctant to let the interview take place. She refused to believe that Raymond might have seen something. A very pious, devout woman, she stated plainly that "flying saucers" and "Martians" could not exist and that she would rather believe that an evil spirit, or the Devil himself, was prompting her son to lie.... A newspaper reporter who went to Premanon and spoke to the woman remarked that her home was probably one of the few places in France where the subject of "flying saucers" had never been discussed at the dinner table. The children themselves never used the term "saucer" or "Martian." They said and repeated that they had seen a "ghost." The idea of a "flying saucer" was started by the adults in Premanon.

To Mrs Romand it became of paramount importance, for both her family's reputation in the community and her until-then unchallenged assumptions of the way things were, that her son must have made the whole thing up. Think about that for a moment, and you may see what a common response it is to information that transgresses our base-beliefs. Sometimes, the consequences of admitting certain realities are thought to be so grave we would rather believe a loved one a lunatic or a liar for testifying to them.

But Raymond and the children didn't change their story: whatever they had seen, it was what they had seen, and the best reference they had for it was not the "flying saucers" of adults' presumptions but rather, vaguely (and so perhaps most accurately), a "ghost." Raymond was punished for his resistance to admit a lie, and was confined to the house until the episode was behind them and normalcy restored.

Edward Ruppelt, director of Project Blue Book, came to respect the ineffability of the UFO phenomenon, yet he also said "next to the 'insufficient data' file was a file marked 'C.P.' This meant crackpot. Into this file went all reports from people who had...inspected flying saucers that had landed in the United States." To this, Vallee remarks that if "we do not refuse to study the UFO as an aerial object, we cannot logically refuse to study it when it has reported to have landed." Furthermore, "we cannot dispose of the sightings made by pilots, customs officers, and railroad engineers, people who are not prone to go berserk, by saying that they have 'merely' had hallucinations or invented a science fiction story."

We all have our meta-narratives about Life, the Universe and Everything by which we interpret events and perceive trends. We need them if we aspire to critical thought, but we also ought to be conscious of them and of what they represent: they're the mental scaffolding to support our modeling of the world and to build a case about it, they are not the world itself. And so they need to be flexible, and we need to be humble enough to reconfigure them when necessary according to new evidence and fresh insight. If not, we can find ourselves in rabbit holes of our own making that resemble nothing so much as The Princess Bride's battle of wits. ("Truly you have a dizzying intellect." "Wait 'til I get going!")

With respect to UFOs, it's a fairly common parapolitical conceit to subsume the entire phenomenon to mind control, and relegate everything that doesn't fit, Ruppelt-like, to the crackpot file. Such absolutism regards the paranormal as a competing and even threatening meta-narrative: if UFOs and "aliens" have been hoaxed and employed as screen memories, then that's regarded as the depth of their reality. No further investigation is required nor considered beneficial.

The Litvinenko story provides an interesting example of competing meta-narratives. The current Kremlin line is that the former spy was not assassinated, but rather unintentionally poisoned by polonium-210 he was peddling to al Qaeda for use as the trigger for a nuclear bomb. It's fascinating to watch this digested by some in the West who, if told a similar tale by the White House, would probably respond How gullible do they think we are? Polonium makes an unlikely choice of poison, unless the assassination was also a myth-making exercise to suggest the Chechens had the bomb. In any regard, answering the rhetorical Cui bono? is not so easy, unless you want to be a Wallace Shawn about it.

Senator Tim Johnson's critical illness is another. Could it be an assassination attempt? Naturally; it always could be. But let's keep our hypotheses in an open hand, and not a balled fist, especially at this early date. Otherwise our theorizing can lapse into soap opera every bit as unreal, though with the appearance of reality, as "Lonelygirl15"'s flight from a thelema-like cult. (Besides, Johnson's no Paul Wellstone, whom Dick Cheney threatened with "severe ramifications" for voting against the war. And to think the Republicans need another body in order to control the agenda is to mistake parties for partisanship and the Washington consensus for representative democracy. )

And regarding 9/11, "inside job" for some means making the hijackers disappear altogether, and so Daniel Hopsicker's ongoing investigation into Mohamed Atta's deep political demimonde will be dismissed as a "distraction," "disinfo," or a threat best disregarded. Their mental scaffolding has become a fetish, and is incapable of innovation or correction.

We need nimble minds about this stuff, and to always be ready to erect new scaffolding when the old no longer serves us well. And when we see a ghost, perhaps we ought to say we've seen one. Even if we don't believe in them.

Error collecting distinctive data from the resource to match against.