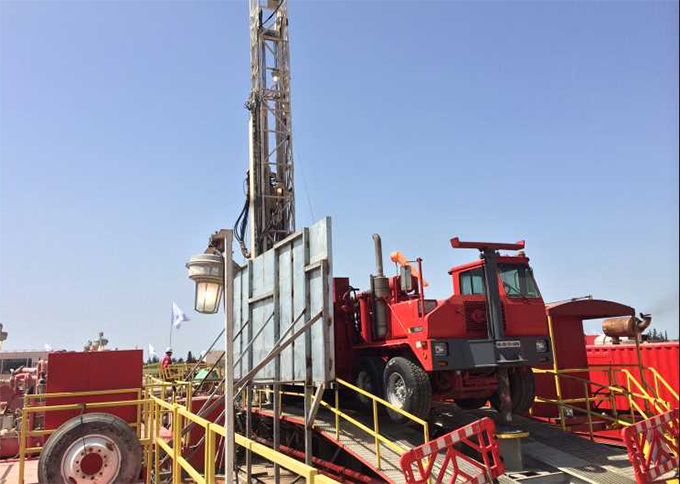 "We are very pleased with the progress of the work and the findings, which have thus far matched our expectations," said Afek Oil chief geologist Dr. Yuval Bartov.

After identifying the presence of hydrocarbons at two oil exploration sites on the Golan Heights, the Afek Oil and Gas company began drilling operations at a third location this week.

The third site, Ness-6, is located near the entrance of the Kanaf moshav, southeast of Gamla. The drilling is expected to reach a depth of 1,400 meters, according to the company.

Related: The 'Refugee' Crisis and the Creation of Greater Israel

As the drilling proceeds at this site, the firm said it is simultaneously conducting preparations for rehabilitation work at the previous locations, Ness-5 and Ness-3.

“We are very pleased with the progress of the work and the findings, which have thus far matched our expectations,” Dr. Yuval Bartov, chief geologist at Afek Oil, said. “Cooperation with supervisory bodies and local authorities is important to us, and we will continue to be strict about cooperating in the work process, while taking into account the environment in which we are operating.”

At the end of July, Afek Oil announced that preliminary results from the company’s Ness-3 site were consistent with those at its Ness-5 well.

Analyses there indicated the presence of hydrocarbons in the vertical drilling sections.

The firm stressed, however, that the volume of resources and to what extent they may be extractable has not yet been determined, and that the resources do not constitute proven, probable, or possible reserves at this point.

The Ness-3 site is located near the Bnei Yehuda industrial area, while the Ness-5 site is located about 5 km. south of that – just northwest of the Avnei Eitan and Nov moshavim and south of Kibbutz Natur and the town of Katzrin. The company has a license to explore up to 10 such sites on the southern Golan Heights, within a 39,500-hectare (97,606.6-acre) zone south of Katzrin, over the next three years.

The Afek Oil project first received its exploratory drilling license in April 2013, following the approval of the Northern District Committee for Planning and Building in July 2014.

In the six months that followed, however, the company faced delays due to environmental opposition. In addition to protests outside the site led by Greenpeace, the Society for the Protection of Nature in Israel and other groups, a High Court of Justice petition that Adam Teva V’Din (Israel Union for Environmental Defense) filed in September temporarily paused the work. However, the High Court dismissed the petition in December.

Following the court ruling, Afek was able to proceed with the drilling in February this year, and began exploration work at the Ness-5 plot at the time.