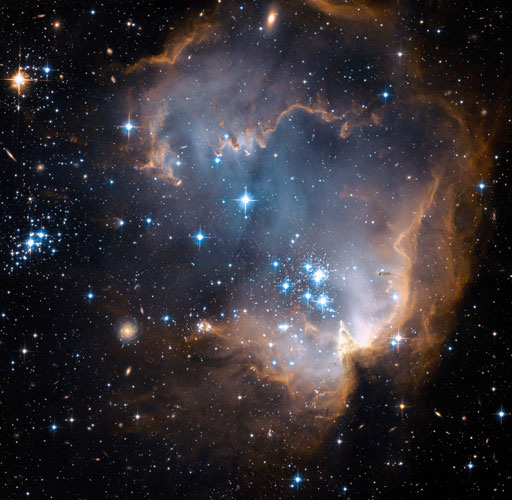 On Christmas Eve, 2009, the startling hypothesis that our Solar System, the Sun and all its planets, are moving into a potentially dangerous and destabilizing interstellar energy cloud, was resoundingly sustained. In their research paper, "A strong, highly-tilted interstellar magnetic field near the Solar System," published the December 24, 2009 issue of Nature, a highly respected scientific journal, M. Opher et al report on data transmitted from Voyager, the twin spacecraft that have been exploring the outer reaches of the Solar System since 1977.

"We have discovered a strong magnetic field just outside the solar system. This magnetic field holds the interstellar energy cloud together and solves the long-standing puzzle of how it can exist at all," says Opher, a NASA Heliophysics Guest Investigator from George Mason University. He explains that this energy cloud is at least twice as strong as had previously been predicted and that the Solar System has begun to pass into it, adding that this field "is turbulent or has a distortion in the solar vicinity."

In fact, most scientists had either minimized the possible significance of the interstellar energy cloud or dismissed the whole notion of its existence altogether. But not Dr. Alexei Dmitriev, the esteemed Russian space physicist whom I visited in Akademgorodok, a clandestine scientific research city outside of Novosibirsk, Siberia. In my recent book, Apocalypse 2012: An Investigation into Civilization's End, I detailed Dmitriev's conclusions, based on his team's analysis of Voyager data, that the atmospheres of Jupiter, Saturn, Uranus and Neptune are inexplicably excited -- immense storms, mammoth eruptions, plasma arcs jetting from the planets' surface to their moons. He reasoned that this turbulence is caused by an external injection of energy into the planets' atmospheres: to wit, an interstellar energy cloud which the leading edge of the Solar System has now entered.

The Nature article does not examine the earthly ramifications of moving into the energy cloud beyond suggesting that we could face an increase in cosmic rays, which could affect everything from space travel to rainfall. But the prescient Dmitriev, who has been publishing on the subject for the past fifteen years, observes that passage into this interstellar cloud has already begun to perturb the Sun, causing solar outbursts that are leading to hurricanes, earthquakes and volcanoes of unprecedented ferocity here on Earth. He is on record as predicting that we will face global catastrophe in "not tens but ones of years." When pressed, Dmitriev guesstimates that the Solar System will remain within this turbulent energy cloud for something on the order of three millennia.

The confirmation of Dmitriev's interstellar energy cloud hypothesis marks the third time that major predictions made in Apocalypse 2012 have been validated since it was published in 2007. Much of the book concerned the potential impacts of solar turbulence on climatic and seismic events, on the global satellite network and also the electrical power grid. Lo and behold, in December, 2008, the National Academy of Sciences (NAS) issued a 100+ page report detailing the grave vulnerability of the electrical power grid to solar blasts, which, by scientific consensus, are next expected to climax in late 2012 or early 2013. The NAS concludes that up to 130 million people could find themselves without electricity for months or years due to solar mega-storms shorting out the grid. Without telecommunications, water or gasoline (the pumps are electric), refrigeration, and basic law enforcement or military security, civilization as we know it would be brought to its knees.

Apocalypse 2012 also reported extensively on evidence that the Earth's protective magnetic shield is showing signs of realignment and deterioration, a hypothesis emphatically validated in December, 2008, THEMIS, a squadron of five NASA research satellites unexpectedly flew through a giant, pole-to-equator breach in our planet's magnetic field. The astrophysicists attached to the THEMIS project were utterly astonished by the e data, with David Sibeck, the project leader, going so far as to declare that "it was as though the Sun rose in the west." The shields are down, Scotty, and the Sun is going to begin pummeling us big time in late 2012 or early 2013.

Our space neighborhood is changing, and not for the better. We need to take precautions to defend our home planet, our way of life, starting right now.