Earth's magnetic field about to flip? 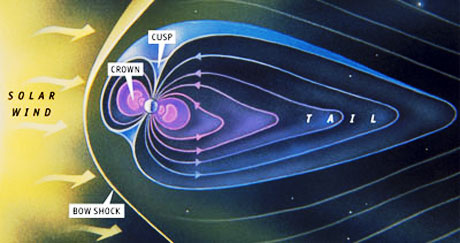 Article picked up from Etemenanki

The weather in space is controlled by events at the centre of the Earth. A pity, then, that the magnetic field generated there may be about to go into reverse

Greenland was discovered without the use of magnetic compasses. The Viking longboats that arrived here in 982 relied on the stars and the sun to maintain their orientation. But it was the compass (a Chinese invention) that enabled later European navigators to bestride the world. It was the compass, too, which revealed that the Earth itself has a magnetic field and thus led to the first serious question about the planet's internal structure: what is down there that generates this field?

Such a question is not merely academic. Besides directing compasses, the Earth's magnetic field reaches out into space to direct the flow of the solar wind around the planet—forming a structure called the magnetosphere (depicted above). When the wind hits this field it creates a shock wave known as the bow shock. Most of the protons and electrons of the wind go round this shock wave, and lots of dangerous radiation from the sun is thus diverted away from the Earth.

There is, however, a growing body of evidence that the Earth's magnetic field is about to disappear, at least for a while. The geological record shows that it flips from time to time, with the south pole becoming the north, and vice versa. On average, such reversals take place every 500,000 years, but there is no discernible pattern. Flips have happened as close together as 50,000 years, though the last one was 780,000 years ago. But, as discussed at the Greenland Space Science Symposium, held in Kangerlussuaq this week, the signs are that another flip is coming soon.

One of those signs is that the strength of the field has been falling by 5% a century recently. A similar (though more rapid) diminution accompanies the reversing of the sun's magnetic field, which happens every 11 years or so. Other evidence comes from old navigation records. Researchers such as Nils Olsen, of the Danish National Space Centre, have used such records to chart the growth of patches of abnormal magnetism. They are able to do so because these records use both compass bearings and astronomical observations to locate a vessel. The changing relationship between the two shows that patches of abnormal magnetism have been growing off south-east Africa and in the South Atlantic.

Just when the magnetic field will flip is impossible to predict from what is known at the moment; the best guess is that there are still several centuries to go. Nor is it clear how long its protective shield will be down. (The record in the rocks is little help, since a geological eyeblink represents many human lifetimes.) But understanding how the magnetosphere works now should help to deal with the consequences if and when it vanishes.

Bright lights
One of the pioneers of the field was Dr Olsen's colleague Eigil Friis-Christensen. Thirty-five years ago he took a boat north along the west coast of Greenland. As he travelled, he set up instruments called magnetometers to measure electric currents in the upper atmosphere. These magnetometers and their successors have played the role that barometers did for early weather forecasters. Then, the pattern of pressure changes the instruments recorded tracked the passage of storms in the atmosphere. Now, it is storms in the magnetosphere that are recorded.

Dr Friis-Christensen's own work has focused on a structure known as the “cusp”. This separates the magnetosphere's two main compartments: the crown, a round projection that stretches sunwards by about five times the diameter of the Earth, and the tail, which is shaped as its name suggests and runs far into space on the Earth's night time side.

The cusp is responsible for the famous auroras that grace high latitudes. This is because it is at the cusp that magnetic field-lines stream down towards the ground, acting as paths for electrons and protons that have slipped past the bow shock. When these particles hit the upper atmosphere they generate light in the same way that electrons from the cathode of an old-fashioned television set do when they hit the phosphorescent dots of the screen.

The famous night-time auroras (borealis in the north, australis in the south) are the result of particles streaming in from the tail. But particles come in from the crown, as well, forming invisible daytime auroras that Dr Friis-Christensen was among the first to study.

Another Greenland-based instrument, a few miles from Kangerlussuaq, has pinned down more details about the cusp. The Sondrestrom Upper Atmospheric Research Facility has a 32-metre-wide radar dish. It measures conductivity from an altitude of 60km to 600km and has helped define the cusp's circuitry. That is important because, although it is not technically part of the atmosphere, the plasma of charged particles in the magnetosphere experiences what might be (and indeed often is) referred to as weather.

Like the weather on Earth, this space weather has consequences. If it gets nasty, communications satellites may be knocked out and radio communications within the atmosphere disrupted. In extreme circumstances, power grids may go down, too. Foul weather in space is also bad news for astronauts. A bad storm could kill an unshielded individual. But although the source of such foul space weather is known—it happens when giant flares on the surface of the sun pour out more protons and electrons than normal—the details depend on structures within the magnetosphere that are only now coming under scrutiny. Sometimes storms drift past the Earth with little impact. On other occasions they pummel the magnetosphere's crown to about half its normal distance from the Earth's surface. Furthermore, the magnetosphere's structure is layered, like an onion. The same type of particle can take on entirely different characteristics, depending on which layer it is in. The art of forecasting space weather is in its infancy.

How much longer it will remain within Dr Friis-Christensen's purview, though, is moot. Barometers are now curiosities, as satellite-based forecasting has taken over. The same thing is about to happen to space meteorology. Five satellites, collectively called THEMIS, that were launched in mid February, may make his magnetometers as old-fashioned as the mahogany instrument hanging in a hotel lobby.