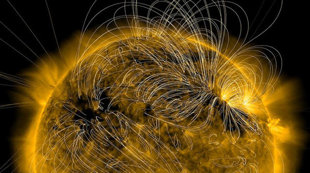 The dramatic uptick in the number of solar flares over the past few weeks, especially the powerful X-class flares, is a good sign that the impending change in the sun’s magnetic field is drawing nearer.

Our sun is a variable star. While some variable stars swing through active and quiet periods very quickly or very haphazardly, our sun works on a fairly regular schedule lasting about 11 years or so. At times like now, when it’s reaching solar maximum, its surface is typically dotted with a multitude of sunspots and it’s throwing off solar flares and coronal mass ejections on nearly a daily basis, and at solar minimum its surface is very quiet.

This cycle is closely tied to the sun’s magnetic field, which changes polarity on roughly the same schedule. At solar minimums, the magnetic fields running through the sun are roughly lined up, with a strong, well-defined magnetic north pole and south pole. At solar maximums, like now, everything devolves into chaos as the overall magnetic polarity virtually disappears, causing the increase in solar flares and eruptions. The polarity doesn’t just go back to the same direction at each solar minimum though, it flips back and forth between one direction and the other.

When the sun reached its last maximum, in a twin-peak from 2001-2003, the magnetic field flipped so that it pointed ’downward’ — with the magnetic north pointing towards the sun’s physical south pole — and it apparently touched off a period of unusual activity. By the next solar minimum, around 2008, the magnetic field strength only grew to about half of what it was during the previous two minimums. Also, the latest ’ramp-up’ towards solar maximum started late, the number of sunspots and flares is roughly half of what it usually is, and we have an even more dramatic twin-peak maximum going on.

According to what Dr. Ken Tapping, from the Dominion Radio Astrophysical Observatory in Penticton, BC, told CBC News, this is causing some concern — not that any of this poses any particular danger to us here on Earth, but simply because it would be nice for the sun to settle back into its typical rhythms.

"Obviously, we would feel happier if we saw the sun doing business as usual, rather than heading off into some territory where we basically are not sure we understand what’s going to happen," he said in the CBC News interview.

READ: NASA: The Sun’s Magnetic Field is about to Flip