These findings, detailed Oct. 15 in the journal Earth and Planetary Science Letters,could shed light on how and why magnetic field reversals happen, and how they leave Earth vulnerable to solar and space radiation, the study scientists said.

Earth’s metal core acts like a giant magnet that emanates a magnetic field with two poles, north and south. These two magnetic poles very roughly match where the planet’s geographic north and south poles lie, which mark the axis on which Earth spins. 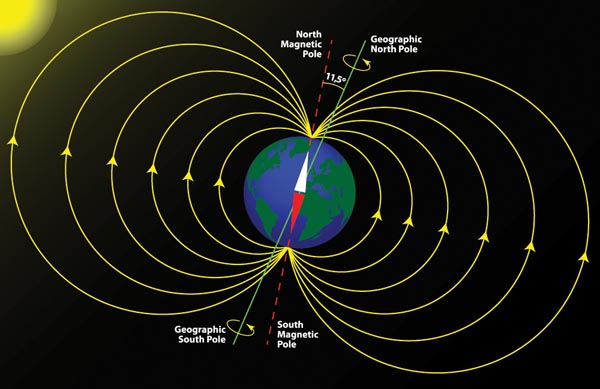 In addition, every several hundred thousand years, Earth’s magnetic field reverses — a compass that would have pointed north would instead aim south. These flips are captured by magnetically sensitive minerals in cooling lava that are literally set in stone pointing to where the poles were at that particular moment in Earth’s history.

Full reversals of the magnetic field usually take millennia to finish, based on those frozen rock records. However, scientists now find that 41,000 years ago, shortly after modern humans first entered Europe, the magnetic poles flipped and flipped again in less than a millennium.

Scientists analyzed data in sediment from the floor of the Black Sea and compared it with other data from the North Atlantic, the Southeast Pacific and around Hawaii. Surprisingly, they found the Earth’s magnetic field took about 200 years to flip, during which time it was just one-twentieth as strong as it is today.

"Former ideas about a field reversal deal with durations of 2,000 to 5,000 years," Nowaczyk told OurAmazingPlanet.

Earth’s magnetic field stayed reversed for only 440 years, during which time it was just one-quarter as strong as it is today. The magnetic poles then flipped back to approximately where they were before over the course of about 270 years. The flip-flop overall is known as the Laschamp event, after the area in France where evidence of it was first discoveredin the 1960s. These new findings reveal how quick this reversal was.

The brevity of this flip overall suggests "it might represent a so-called aborted reversal," Nowaczyk said. "This means the geomagnetic field tried to reverse, but fell back." Such aborted reversals, also known as excursions, may have happened at least a dozen times during the last 780,000 years since the last full reversal, he explained.

Earth’s magnetic field helps protect the planet from energetic particles streaking out from deep space and the sun. During the Laschamp reversal, Earth was significantly more vulnerable to radiation from space, judging by higher levels of radioactive beryllium seen in ice samples from Greenland, Nowaczyk said.

Such radiation poses a particular threat in our modern world, so understanding these reversals is helpful to better understand the threats from space.

Earth’s magnetic field is generated by the roiling of its outer liquid core. Research suggests that at times this outer core can behave as many magnets instead of one. These magnets can, in principle, cancel each other out, causing the magnetic field overall to weaken or flip.

"We need more data from more sites of the same reversal to get a better understanding of these processes," Nowacyzk said.