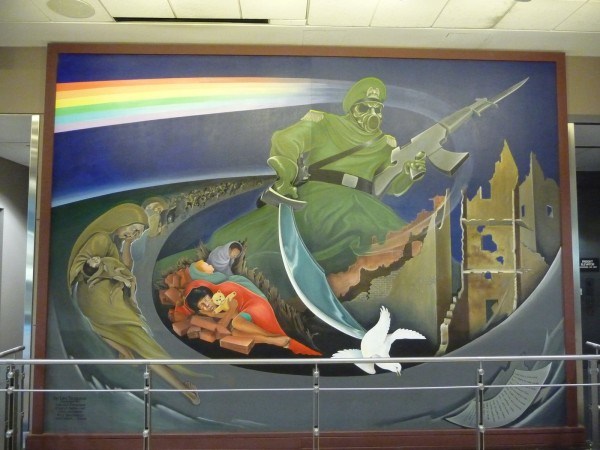 For the first time, a whistle-blower from within the DIA complex confirms the existence of a massive deep underground military facility located beneath the airport

The Denver International Airport (DIA) is nestled on a vast 53 square mile complex and is owned and operated by the City of Denver. In fact, it’s the largest airport in the United States, in terms of land mass garnered, and the second largest airport in the world to Saudi Arabia’s King Fahd International Airport as I pointed out in my appearance on the Travel Channel series America Declassified.

The airport serves over 50 million passengers a year and is now incorporating a massive new project called “Airport City” an aerotropolis which has been presented publicly by the Mayor of Denver, Michael Hancock, who respectively declined an interview with Intellihub News. However, interestingly, the new aerotropolis will incorporate an expansive business district with new lodging as well as an agricultural and technical district within the confines of the airport property to attract more revenue to Denver’s growing economy. In fact, between the planed aerotropolis and Colorado’s booming marijuana industry, DIA just might be the next biggest thing since sliced bread.

The concept is innovative, a first for an airport in America, and is likely to become the envy of other airports around the world. In fact, according to Airport City Denver’s official website:

In 2010, DIA and the City and County of Denver took a major step in DIA’s evolution to fulfill its gateway role by inviting firms from around the world to submit proposals to assist DIA in planning, assessing and creating an Airport City at DIA as the core of and competitive accelerator for the emerging Denver aerotropolis. Later that year, DIA selected MXD Development Strategists (MXD) and its collaborative team including Design Workshop, CH2M Hill, Dr. John Kasarda, Integrity Parking, Transcore and Ambient Energy to prepare the Denver International Airport City Development Strategy.

However, local residents and others have been questioning the new construction in and around the airport property as several red flags have been raised. In fact, since the first construction phases of the airport started in the early 1990′s, there have been several indicators that something else may be taking place on or under the grounds of the 53 square mile complex.

Some speculate that a deep underground military facility, part of the Continuity of Government (COG) program exists on the site. A massive underground city to be used by our government in the event that Washington or our central governments command hub is compromised. According to some investigative reports, including one headed up by the former Governor of Minnesota, Jesse Ventura, the underground city that lies beneath the airport quite possibly connects to other deep underground military installations throughout the country.

Now, a source of mine within the airport confirmed for the first time astonishing information regarding the underground facility, providing details unknown to airport staff and the general public until now.

Strange words and symbols embedded in the floor? Check.


Tune into Red Ice Radio to hear more from guests on what may be hidden underground: