Dec 22, 2009 Source: huffingtonpost.com
Just in time for Christmas, archaeologists on Monday unveiled what may have been the home of one of Jesus' childhood neighbors. The humble dwelling is the first dating to the era of Jesus to be discovered in Nazareth, then a hamlet of around 50 impoverished Jewish families where Jesus spent his boyhood.

Archaeologists and present-day residents of Nazareth imagined Jesus as a youngster, playing with other children in the isolated village, not far from the spot where the Archangel Gabriel revealed to Mary that she would give birth to the boy.

Today the ornate Basilica of the Annunciation marks that spot, and Nazareth is the largest Arab city in northern Israel, with about 65,000 residents. Muslims now outnumber Christians two to one in the noisy, crowded city. 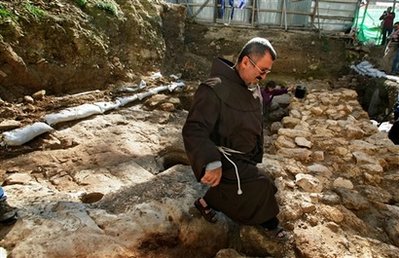 Reverend Jack Karam walks in the excavation site of the remains of the first dwelling in Nazareth, Israel that can be dated back to the time of Jesus, Monday, Dec. 21, 2009. (AP Photos/Dan Balilty)
The archaeological find shows how different it was 2000 years ago: There were no Christians or Muslims, the Jewish Temple stood in Jerusalem and tiny Nazareth stood near a battleground between Roman rulers and Jewish guerrillas.

The Jews of Nazareth dug camouflaged grottos to hide from Roman invaders, said archaeologist Yardena Alexandre, excavations director at the Israel Antiquities Authority. But the hamlet was so far off the beaten path that the caves were apparently not needed, she said.

Based on clay and chalk shards found at the site, the dwelling appeared to house a "simple Jewish family," Alexandre added, as workers carefully chipped away at mud with small pickaxes to reveal stone walls.

"This may well have been a place that Jesus and his contemporaries were familiar with," Alexandre said. A young Jesus may have played around the house with his cousins and friends. "It's a logical suggestion."

The discovery so close to Christmas pleased local Christians.

"They say if the people do not speak, the stones will speak," said the Rev. Jack Karam of the nearby basilica.

Archaeologist Stephen Pfann, president of the University of The Holy Land, noted: "It's the only witness that we have from that area that shows us what the walls and floors were like inside Nazareth in the first century." Pfann was not involved in the dig.

Alexandre said workers uncovered the first signs of the dwelling last summer, but it became clear only this month that it was a structure from the days of Jesus. 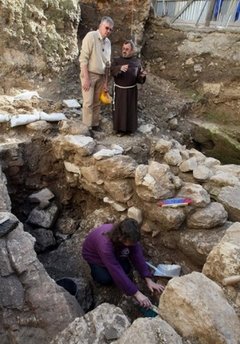 Coordinator of the International Center of Marie de Nazareth, Marc Hodara (left), and Brother Jacques (R), stand at an excavation site near the Church of the Annunciation. (AFP/Jack Guez)
Alexandre's team found remains of a wall, a hideout, a courtyard and a water system that appeared to collect water from the roof and supply it to the home. The discovery was made when builders dug up the courtyard of a former convent to make room for a new Christian center, just yards from the Basilica.

It is not clear how big the dwelling is. Alexandre's team has uncovered about 900 square feet of the house, but it may have been for an extended family and could be much larger, she said.

Archaeologists also found a camouflaged entry way into a grotto, which Alexandre believes was used by Jews to hide from Roman soldiers who were battling Jewish rebels for control of the area.

The grotto could have hidden around six people for a few hours, she said.

However, Roman soldiers did not end up battling Nazareth's Jews because the hamlet had little strategic value. The Roman army was more interested in larger towns and strategic hilltop communities, she said.

Alexandre said similar camouflaged grottos were found in other ancient Jewish communities of the lower Galilee, such as the nearby biblical village of Cana, which did witness battles between Jews and Romans.

Archaeologists also found clay and chalk vessels likely used by Galilean Jews of the time. The scientists concluded a Jewish family lived there because of the chalk, which Jews used to ensure the ritual purity of the food and water kept inside the vessels.

The shards also date back to the time of Jesus, which includes the late Hellenic, early Roman period that ranges from around 100 B.C. to the first century, Alexandre said. The determination was made by comparing the findings to shards and remains typical of that period found in other parts of the Galilee, she said.

The absence of any remains of glass vessels or imported products suggested the people who lived in the dwelling were simple, but Alexandre said the remains did not indicate whether they were traders or farmers.

The only other artifacts from the time of Jesus found in the Nazareth area are ancient burial caves that provided a rough idea of the village's population at the time, Alexandre said.

Work is now taking place to clear newer ruins built above the dwelling, which will be preserved. The dwelling will become part of a new international Christian center being built close to the site and funded by a French Roman Catholic group, said Marc Hodara of the Chemin Neuf Community overseeing construction. 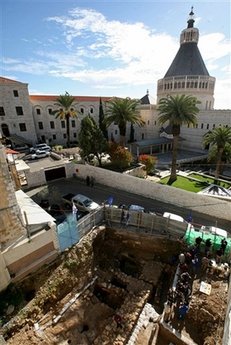 The Church of the Annunciation seen alongside the excavation site
of the remains of the first dwelling. (AP Photos/Dan Balilty)
Alexandre said limited space and population density makes it unlikely that archaeologists can carry out further excavations in the area, leaving this dwelling to tell the story of what Jesus' boyhood home may have looked like.

The discovery at "this time, this period, is very interesting, especially as a Christian," Karam said. "For me it is a great gift."