To the Philosophy Faculty and Graduate Students of Stony Brook University,

On December 5th the Leiter Report, the leading blog in academic philosophy (famous for its departmental rankings), featured a post by Brian Leiter himself libelously describing me as a “NeoNazi” and identifying the New Jersey Institute ofN Technology as my workplace and the State University of New York at Stony Brook as the institution that granted me a PhD. I am still on the Stony Brook Philosophy Department graduate student list serve (you forgot to unsubscribe me when I graduated), so I regularly receive student representative notes from faculty meetings. In a meeting held on December 7th, an unidentified person (the only unidentified person in the transcript) asserts that a PhD alumnus “is involved with the Aryan White Supremacist movement” and announces that there will be a review of my dissertation research preceding a possible public statement disavowing me. The claimant concluded after watching “a couple” of my videos (I currently have 23, in English and Persian, on my YouTube playlist  that “they are appropriately described as Aryan White Supremacist.” While I am not named in these notes, I am eventually named by a current graduate student later in the email thread that begins with an upload of the faculty meeting notes, where the statement “many people are concerned” also suggests that I have already been widely slandered and defamed. Here are images of all of the relevant posts and messages. 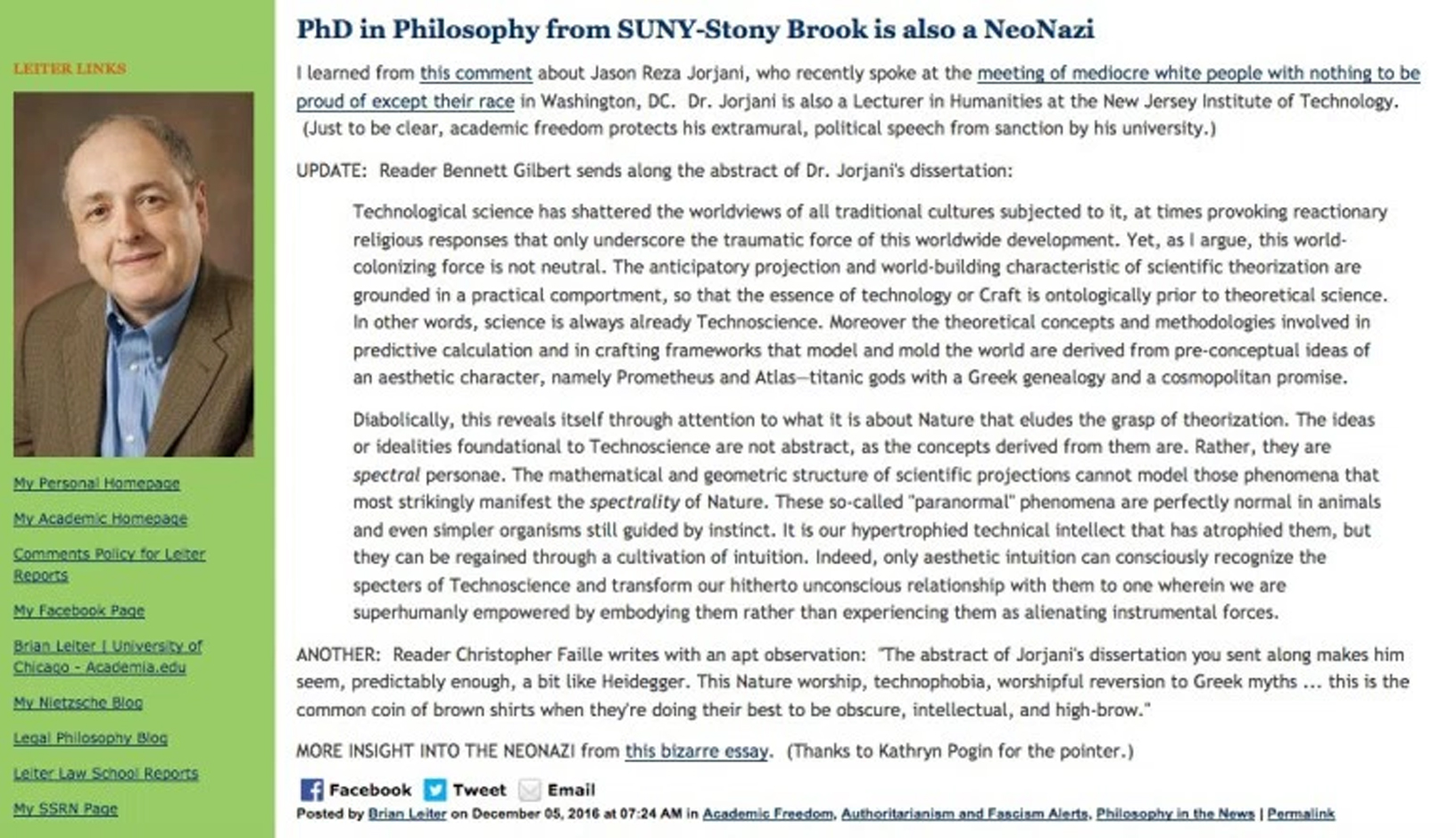 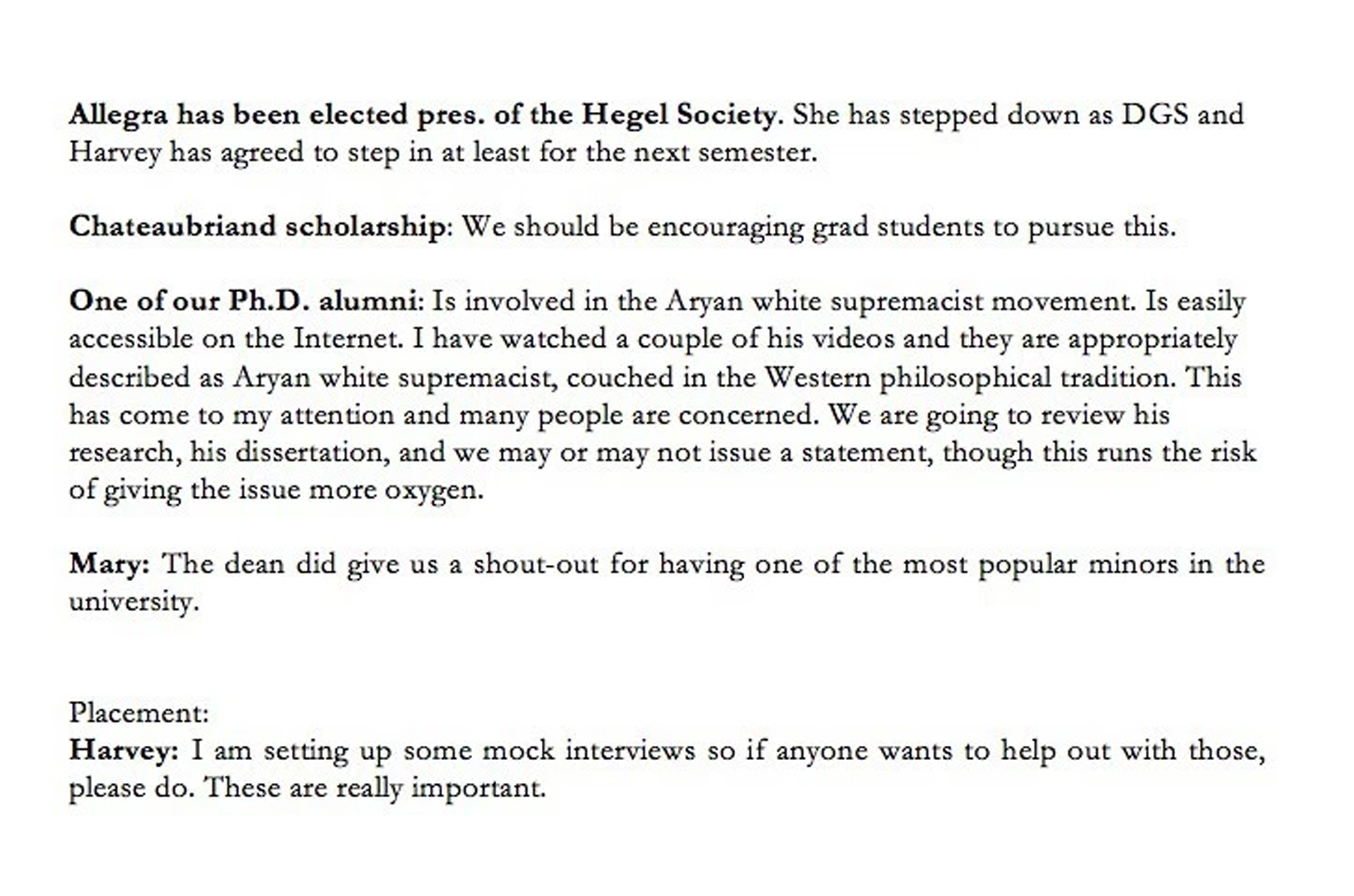 What disturbs me the most is that in attendance at this meeting were two internal readers of my dissertation (Edward S. Casey and Megan Craig), as well as three other professors I studied under during my four years in the department (Clyde Lee Miller, Harvey Cormier) – including the current department chair (Mary Rawlinson). These five people, well at least four of them (I did not have much interaction with Mary) came to know me well enough that they should find such claims incredible and, at the very least, I ought to have received a private email or phone call from them (they all have my contact information) before they held a meeting declaring that they are preparing to publicly denounce me and possibly attempt to revoke my doctoral degree. I am appalled by this irresponsibility and lack of integrity on the part of my former professors, and I demand an apology. That ought to be the kind of public statement made and should the department decide to denounce or disavow me despite this warning, I can imagine a libel suit against the State University of New York that would become a crusade for the cause of academic freedom that, perhaps after a number of appeals, ends in a spectacular victory at the United States Supreme Court under the Trump Administration.

An evaluation of my full body of writings and video interviews in the public domain – including and especially my book Prometheus and Atlas – would never support Leiter’s defamation or your slanderous attack on my character. I have never understood what “Neo” is supposed to mean in the context of “NeoNazi”, other than an evocation of Hollywood depictions of “skin head” militiamen. A National Socialist is a National Socialist. Martin Heidegger, the greatest philosopher of the 20th century, was a National Socialist. I am not one, even if I have argued, rightly (in my October Stockholm speech), that National Socialist Germany was the only political regime to seriously consider the implications of mainstream scientific recognition and widespread cultivation of those latent human capacities hitherto marginalized as “paranormal.” To put my relationship to National Socialism in the language of the Left, since most of my accusers fancy themselves of that political persuasion, to call me a National Socialist is like calling someone a Stalinist simply because he is a Marxist. A Trotskyite would certainly be defamed by such an epithet, and would be rightly outraged to be subjected to that kind of slander. I am not any kind of nationalist.

Even if I am a strong supporter of the Iranian nationalist opposition to the Islamic Republic, which not incidentally is where my discourse of Aryan identity comes from, it is because I see a resurgence of the humanitarian legacy of Zarathustra and Cyrus the Great as a tremendous benefit for shaping the world order of the 21st century. When I speak of the Aryan heritage it is in affirmation of the millions of Iranians who spontaneously made a pilgrimage to the tomb of Cyrus the Great on October 29th of this year and last, chanting slogans such as “We are Aryans, we don’t worship Arabs!” and “Our Aryan Cyrus, Your honor is our honor!” Predictably, the lying international press did not give this mass demonstration and harbinger of the overthrow of Islam in Iran (not just as a political system, but as a religious ideology) the media coverage that it deserved.

Read the rest at: righton.net