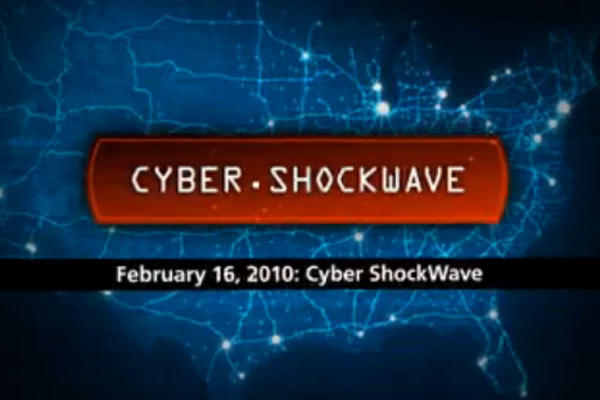 Former top US officials staged a digital doomsday simulation on Tuesday in which a huge cyberattack crashes cellphone networks, slows Web traffic to a crawl and plunges major cities into darkness.

Dubbed "Cyber ShockWave," the elaborate exercise was held in a Washington hotel room transformed for the day into the White House Situation Room, where the president and his advisers typically meet to address national emergencies.

As the "crisis" escalated, the officials discussed various actions including calling out the National Guard, nationalizing the utility companies and staging a retaliatory strike if the authors of the cyberattack become known.

"If this is an attack on the United States the president, as commander in chief, has the authority to use the full powers at his disposal," said former deputy attorney general Jamie Gorelick, in her role as attorney general.
"We're in good shape from a command-and-control standpoint," Charles Wald, a retired general acting as Secretary of Defense, reassured the team.

"We can take action offensively if we know where to go," said Wald, former deputy commander of US European Command. "Problematically, we don't know where that is."

"I do think we need to be careful about talking about acts of war," cautioned John Negroponte, the former Director of National Intelligence who switched hats for the simulation to portray the Secretary of State.

The exercise, which was filmed by CNN and will be broadcast at a later date, was organized by the Bipartisan Policy Center to "educate the public about our vulnerabilities," said Eileen McMenamin, BPC vice president of communications.

Three large video screens behind the participants displayed multi-color maps of the United States with a series of mock updates and a fictional television network, "GNN," broadcast news reports on the cascading crisis.
The simulated cyberattack was spread through a free application for smartphones about "March Madness," the wildly popular annual US college basketball tournament.

The "March Madness" malware contained video footage of the Red Army although a security adviser warned this may be a "red herring" and whether the attack was launched by a state, terrorists or criminals was not immediately clear.

Launched from servers in Russia, it first crippled cellphone networks, then landlines, then the Internet and eventually the electricity grid in the entire eastern United States, exacerbated by a pair of bombings at power stations.

New York, Philadelphia and Washington were plunged into darkness, airline traffic was disrupted and the financial markets ground to a halt.
"This is a massive blow to the solar plexus of the economy," said "Treasury Secretary" Stephen Friedman, former director of the National Economic Council.

National Security Adviser Chertoff peppered the cabinet with questions.
"If we were to shut a server down in Russia, would the Russians view that as an attack?" he asked. "If the attacker is either a state actor or a terrorist group what are our options for responding or retaliating?"

Speaking after the scenario was over, Negroponte said it was fairly realistic. "None of it struck me as particularly outlandish," he said.

Former deputy CIA director John McLaughlin, who was bumped up to Director of National Intelligence for the cyber game, said Al-Qaeda would clearly "like to carry out something like this but we don't know their capabilities."

Wald, the Pentagon chief for a day, said: "I think the scenario we saw today is believable. I think we're preparing for it. I don't think we're as prepared as we should be."

How will America respond to a vast cyber attack? An all-star team of security agents and lawmakers will provide a key glimpse today.

The event, sponsored the Bipartisan Policy Center, is a kind of high-level role playing game. As reports of the fake attack roll in, Washington veterans will imagine themselves as certain cabinet positions and collective advise the president on how to act.

"The participants, whose mission is to advise the president and mount a response to the attack, will not know the scenario in advance," wrote the Bipartisan Policy Center in announcing Cyber ShockWave. "They will react to the threat in real time, as intelligence and news reports drive the simulation, shedding light on how the difficult split-second decisions must be made to respond to an unfolding and often unseen threat."

And after the event, everyone will face the press and experts to defend their action. CNN filmed the exercise and will air a report on it next weekend.

Such role playing is common among the military and analyst groups – the Obama Administration has run through at least three similar cyber wargames this year – but the outcomes are rarely public.

Today's simulation follows the mold of Oil ShockWave, the group's 2007 simulation of an oil crisis, and was created by former CIA Director Michael Hayden and members of the 9-11 commission, with help from Georgetown University and PayPal.