The sons of a Cold War scientist who plunged to his death in 1953 several days after unwittingly taking LSD in a CIA mind-control experiment sued the government Wednesday. They claimed the CIA murdered their father, Frank Olson, by pushing him from a 13th-story window of a hotel – not, as the CIA says, that he jumped to his death.

Sons Eric and Nils Olson of Frederick, Md., sought unspecified compensatory damages in the lawsuit filed in federal court, but their lawyer, Scott D. Gilbert, said they also want to see a broad range of documents related to Olson’s death and other matters that they say the CIA has withheld from them since the death.

Olson was a bioweapons expert at Fort Detrick, the Army’s biological weapons research center in Maryland. Their lawsuit claims the CIA killed Olson when he developed misgivings after witnessing extreme interrogations in which they allege the CIA committed murder using biological agents Olson had developed.

The CIA had a program in the 1950s and `60s called MK-ULTRA, which involved brainwashing and administering experimental drugs like LSD to unsuspecting individuals. The project was investigated by Congress in the 1970s.

Olson consumed a drink laced with LSD by CIA agents on Nov. 19, 1953, the suit says. Later that month, after being taken to New York City purportedly for a "psychiatric" consultation, Olson plunged to his death.

At the time – when Eric and Nils Olson were 9 and 5 years old, respectively – the CIA said he died in an accident and did not divulge to his family that Olsen had been given LSD.

But in 1975, a commission headed by Vice President Nelson Rockefeller released a report on CIA abuses that included a reference to an Army scientist who had jumped from a New York hotel days after being slipped LSD in 1953. Family members threatened to sue, but President Gerald Ford invited the family to the White House, assuring them they would be given all the government’s information. CIA Director William Colby handed over documents and the family accepted a $750,000 settlement to avert a lawsuit.

In an email, CIA spokeswoman Jennifer Youngblood said that while the agency doesn’t comment on matters before U.S. courts, "CIA activities related to MK-ULTRA have been thoroughly investigated over the years, and the agency cooperated with each of those investigations." She noted that tens of thousands of pages related to the program have been released to the public.

In a statement, Eric Olson said that the CIA has not given a complete picture of what happened to his father.

"The evidence shows that our father was killed in their custody," he said. "They have lied to us ever since, withholding documents and information, and changing their story when convenient."

In New York, Olson was examined by an “allergist,” Harold Abramson, who gave him sedatives and recommended Olson be hospitalized for psychiatric treatment, according to the complaint.

On Nov. 27, Olson and Lashbrook checked into the Statler Hotel. The men had two martinis each before going to bed in the same room. At about 2:30 a.m., Olson fell from the window.

“During one of these calls, the hotel operator overheard one party, likely Dr. Lashbrook, say, ’Well he’s gone.’ The person on the other end of the call responded, ’That’s too bad’,” according to the complaint.

Olson’s death is “substantially similar” to an assassination technique described in a CIA manual published in 1953, which recommends disguising the murder as an accident and suggests drugging the person, hitting them in the temple with a blunt object and then causing them to fall more than 75 feet onto a hard surface, according to the complaint. 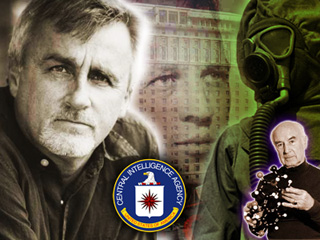 RedIceRadio spoke with H.P. Albarelli, Jr. to talk about Biological Warfare, the CIA’s experimentation with LSD and the murder of microbiologist Dr. Frank Olson. We talked about the U.S. army and Frank Olson who specialized in germ warfare, aero biology and the delivery of deadly viruses and infectious microorganisms through spray’s and aerosol cans. Hank Albarelli works in the legal profession and was a member of the Carter administration. He is the author of "A Terrible Mistake: The Murder of Frank Olson and the CIA’s Secret Cold War Experiments".

Peter Levenda - Freemasonry, the Elite & Leaders above the Law<