The Mysterious Death of Heather Heyer

If the mainstream narrative is to be believed, Heather was struck by James Fields’ car subsequently died from her injuries. However, there are some highly curious details surrounding her death.

For one, Heather died from a heart attack, according to her mother. And as of now, her autopsy has not been released.

After Heather’s death, pictures were circulating of an obese woman in a teal shirt on the hood of the car in front of Fields’ Challenger. Many people have assumed that this was Heather.

However, they are, in fact, two different women.

In the following picture, the woman in teal – who is clearly much older than Heather – is seen being escorted away on a stretcher. Also, the article where I found this picture refers to her as an “injured woman” – it’s clearly not Heather. 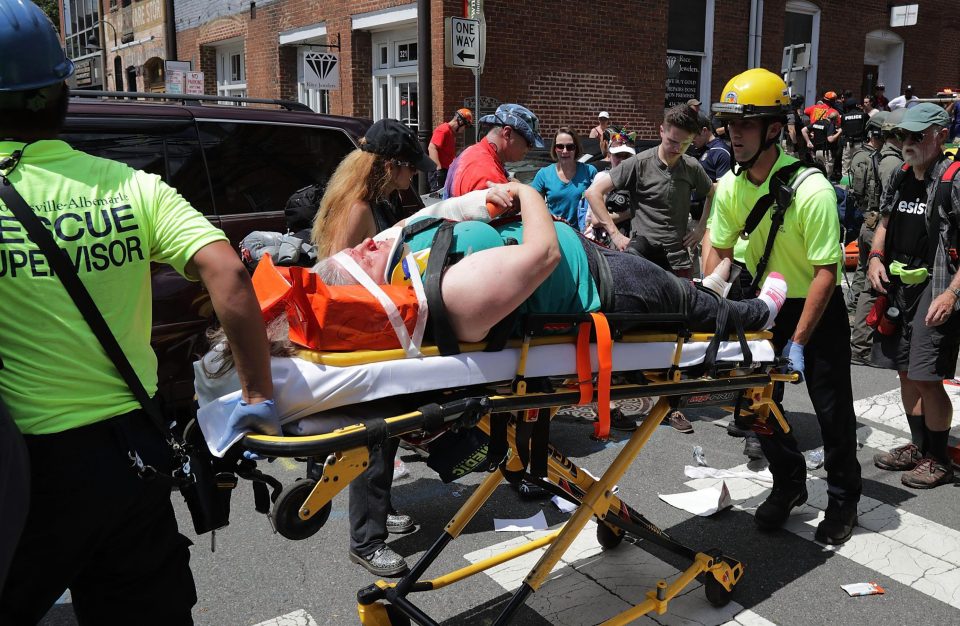 It’s understandable why someone would confuse this woman for Heather Heyer: she’s overweight, White, and in the direct vicinity of where Heather died. Moreover, we have been led to believe that Heather Heyer was hit by Fields’ car, so it would be natural to assume that this was her.

But if that wasn't Heather on the hood of the grey car, where was she during all of this?

Thanks to some impressive sleuthing, a number of Twitter users have been able to locate her.

In the following picture, a witness to the crash confirms that the woman in this picture died. Given that only one person died in Charlottesville, it is obvious that this is Heather Heyer.

So where exactly was Heather during the crash?

It appears that she was closer to the sidewalk. Here, we have a picture of Heather on the ground, being given CPR:

This is her, she was wearing all black. I think she was among the crowd, right side of the cars. Not near the Dodge. It never touched her. pic.twitter.com/v9TLUuVEFZ

Next, at :38 in the following video we can see Heather Heyer to the right of Fields' Challenger:

In this video at 0:38 I believe you can see Heather in the street next to the charger. https://t.co/vYHenb2186

Here's a still from the scene:

This heather as the car goes past her. pic.twitter.com/YlLlWLaoTA

The video is chaotic; it's hard to make sense of. While I initially thought that Heather was not hit by Fields, it now appears that his car did make contact.

Still, it's strange that the people who were thrown in the air after being hit by Fields – including the woman in teal – survived, but Heather did not. And as Hunter Wallace pointed out, it's rare for people blocking traffic like this to die.

If Heather's autopsy reveals that she died from a heart attack unrelated to the crash, will the Left's "neo-Nazi terrorist" narrative be lessened?

The Significance of Heather's Death

It’s worth noting that Andrew Anglin mocking the official Heather Heyer narrative resulted in the Daily Stormer being removed from GoDaddy. Afterwards, Anglin cycled through multiple domain registrars, all of which eventually removed him as well. As such, the Daily Stormer is currently relegated to the Dark Web. (Domain registrars were previously politically neutral. Thus is their recent foray into censoring right-wingers both alarming and significant.)

Further interesting is the fact that Gab, a self-styled free speech platform, received a complaint from its registrar, demanding that a post by Andrew Anglin mocking the Heather Heyer narrative be removed – or else. Understandably, Gab CEO Andrew Torba asked Anglin to remove the post rather than allow his site to be disabled.

We’re entering uncharted territory. Anglin’s case is evidence that one can essentially be banned from the Internet for having the wrong opinions – something previously unheard of. The battle against politically motivated censorship – both online and offline – has been kicked into overdrive.

And for whatever reason, the narrative regarding Heather Heyer’s death is at the center of this battle.

Did Andrew Anglin’s comments about Heather Heyer’s weight – which are relevant, given how she died – warrant such a vicious reaction simply because they were offensive?

Or is maintaining the story that sweet, innocent Heather was intentionally murdered by a crazed neo-Nazi such a priority for shadowy, powerful interests that they’re willing to do anything to prevent the truth from surfacing?

I’ll let you be the judge.