Japanese government delayed giving information to the public, according to interim report into the disaster 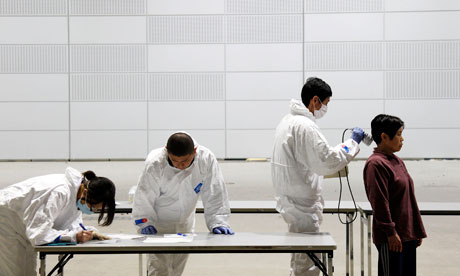 Japan’s response to the nuclear crisis that followed the tsunami in March was confused and riddled with problems , a report has revealed.

The disturbing picture of harried workers and government officials scrambling to respond to the problems at the Fukushima Daiichi nuclear power plant was depicted in the report, detailing a government investigation.

The 507-page interim report, compiled by interviewing more than 400 people, including utility workers and government officials, found that authorities had grossly underestimated tsunami risks, assuming the highest wave would be six metres (20ft). The tsunami hit at more than double that level.

The report criticised the use of the term soteigai, meaning unforeseeable, which it said implied authorities were shirking responsibility for what had happened. It said by labelling the events as beyond what could have been expected, officials had invited public distrust.

The report found that workers at Tokyo Electric Power Co (Tepco), the utility that ran Fukushima Daiichi, were untrained to handle emergencies such as the power shutdown that struck when the tsunami destroyed backup generators, setting off a nuclear disaster. There was no clear manual to follow, and the workers failed to communicate, not only with the government but also among themselves, it said.

Finding alternative ways to bring water to the reactors was delayed for hours because of the mishandling of an emergency cooling system, the report said. Workers assumed the system was working, despite signs it had failed and was sending the nuclear core into meltdown.

A better response might have reduced the core damage, radiation leaks and the hydrogen explosions that followed at two reactors and sent plumes of radiation into the air.

"A newly released report on the Fukushima nuclear crisis says it was down to the plant’s operators being ill-prepared and not responding properly to the earthquake and tsunami disaster. A major government inquiry said some engineers abandoned the plant as the trouble started and other staff delayed reporting significant radiation leaks. Professor Christopher Busby, scientific secretary to the European Committee on Radiation Risks, says health damage after contamination will be more serious than Japan announced. "