Jun 5, 2012 Source: globalresearch.ca
The operator of the stricken Fukushima nuclear plant has been dumping something like a thousand tons per day of radioactive water into the Pacific ocean.

Remember, the reactors are “riddled with meltdown holes”, building 4 – with more radiation than all nuclear bombs ever dropped or tested – is missing entire walls, and building 3 is a pile of rubble.

The whole complex is leaking like a sieve, and the rivers of water pumped into the reactors every day are just pouring into the ocean (with only a slight delay).

Most people assume that the ocean will dilute the radiation from Fukushima enough that any radiation reaching the West Coast of the U.S. will be low.

For example, the Congressional Research Service wrote in April:

Scientists have stated that radiation in the ocean very quickly becomes diluted and would not be a problem beyond the coast of Japan.

U.S. fisheries are unlikely to be affected because radioactive material that enters the marine environment would be greatly diluted before reaching U.S. fishing grounds.

And a Woods Hole oceanographer said:

“The Kuroshio current is considered like the Gulf Stream of the Pacific, a very large current that can rapidly carry the radioactivity into the interior” of the ocean, Buesseler said.

“But it also dilutes along the way, causing a lot of mixing and decreasing radioactivity as it moves offshore.”

Specifically, we noted more than a year ago:

The ocean currents head from Japan to the West Coast of the U.S.

The floating debris will likely be carried by currents off of Japan toward Washington, Oregon and California before turning toward Hawaii and back again toward Asia, circulating in what is known as the North Pacific gyre, said Curt Ebbesmeyer, a Seattle oceanographer who has spent decades tracking flotsam.

“All this debris will find a way to reach the West coast or stop in the Great Pacific Garbage Patch,” a swirling mass of concentrated marine litter in the Pacific Ocean, said Luca Centurioni, a researcher at Scripps Institution of Oceanography, UC San Diego.

Here is what the North Pacific Gyre looks like: 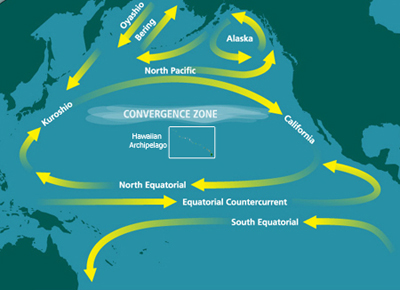