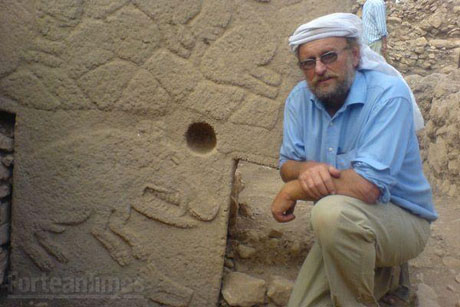 As a child, Klaus Schmidt used to grub around in caves in his native Germany in the hope of finding prehistoric paintings. Thirty years later, representing the German Archaeological Institute, he found something infinitely more important -- a temple complex almost twice as old as anything comparable on the planet.

"This place is a supernova", says Schmidt, standing under a lone tree on a windswept hilltop 35 miles north of Turkey’s border with Syria. "Within a minute of first seeing it I knew I had two choices: go away and tell nobody, or spend the rest of my life working here." 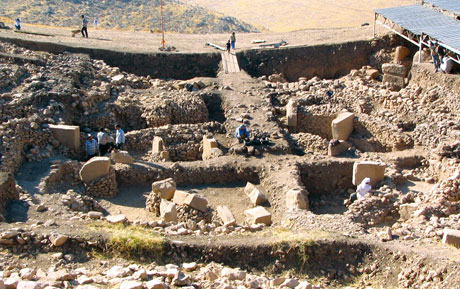 Behind him are the first folds of the Anatolian plateau. Ahead, the Mesopotamian plain, like a dust-colored sea, stretches south hundreds of miles to Baghdad and beyond. The stone circles of Gobekli Tepe are just in front, hidden under the brow of the hill. 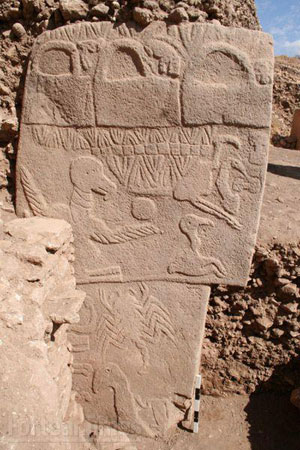 Compared to Stonehenge, Britain’s most famous prehistoric site, they are humble affairs. None of the circles excavated (four out of an estimated 20) are more than 30 meters across. What makes the discovery remarkable are the carvings of boars, foxes, lions, birds, snakes and scorpions, and their age. Dated at around 9,500 BC, these stones are 5,500 years older than the first cities of Mesopotamia, and 7,000 years older than Stonehenge.

Never mind circular patterns or the stone-etchings, the people who erected this site did not even have pottery or cultivate wheat. They lived in villages. But they were hunters, not farmers.

"Everybody used to think only complex, hierarchical civilizations could build such monumental sites, and that they only came about with the invention of agriculture", says Ian Hodder, a Stanford University Professor of Anthropology, who, since 1993, has directed digs at Catalhoyuk, Turkey’s most famous Neolithic site. "Gobekli changes everything. It’s elaborate, it’s complex and it is pre-agricultural. That fact alone makes the site one of the most important archaeological finds in a very long time."

With only a fraction of the site opened up after a decade of excavations, Gobekli Tepe’s significance to the people who built it remains unclear. Some think the site was the center of a fertility rite, with the two tall stones at the center of each circle representing a man and woman.

It’s a theory the tourist board in the nearby city of Urfa has taken up with alacrity. Visit the Garden of Eden, its brochures trumpet, see Adam and Eve.

Schmidt is skeptical about the fertility theory. He agrees Gobekli Tepe may well be "the last flowering of a semi-nomadic world that farming was just about to destroy," and points out that if it is in near perfect condition today, it is because those who built it buried it soon after under tons of soil, as though its wild animal-rich world had lost all meaning. 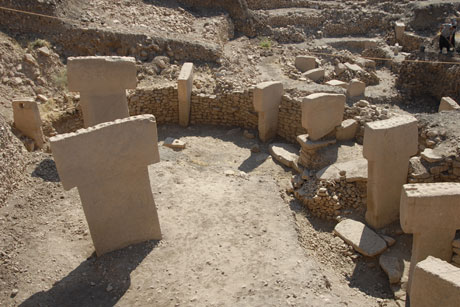 But the site is devoid of the fertility symbols that have been found at other Neolithic sites, and the T-shaped columns, while clearly semi-human, are sexless. "I think here we are face to face with the earliest representation of gods", says Schmidt, patting one of the biggest stones. "They have no eyes, no mouths, no faces. But they have arms and they have hands. They are makers." 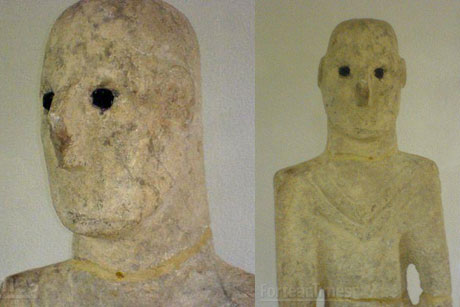 forteantimes.com writes: Thsi is probably the oldest life-size statue yet discovered anywhere.
"In my opinion, the people who carved them were asking themselves the biggest questions of all," Schmidt continued. "What is this universe? Why are we here?"

With no evidence of houses or graves near the stones, Schmidt believes the hill top was a site of pilgrimage for communities within a radius of roughly a hundred miles. He notes how the tallest stones all face southeast, as if scanning plains that are scattered with archeological sites in many ways no less remarkable than Gobekli Tepe.

Last year, for instance, French archaeologists working at Djade al-Mughara in northern Syria uncovered the oldest mural ever found. "Two square meters of geometric shapes, in red, black and white - a bit like a Paul Klee painting," explains Eric Coqueugniot, the University of Lyon archaeologist who is leading the excavation.

Coqueugniot describes Schmidt’s hypothesis that Gobekli Tepe was meeting point for feasts, rituals and sharing ideas as "tempting," given the site’s spectacular position. But he emphasizes that surveys of the region are still in their infancy. "Tomorrow, somebody might find somewhere even more dramatic."

Director of a dig at Korpiktepe, on the Tigris River about 120 miles east of Urfa, Vecihi Ozkaya doubts the thousands of stone pots he has found since 2001 in hundreds of 11,500 year-old graves quite qualify as that. But his excitement fills his austere office at Dicle University in Diyarbakir.

"Look at this", he says, pointing at a photo of an exquisitely carved sculpture showing an animal, half-human, half-lion. "It’s a sphinx, thousands of years before Egypt. Southeastern Turkey, northern Syria - this region saw the wedding night of our civilization."