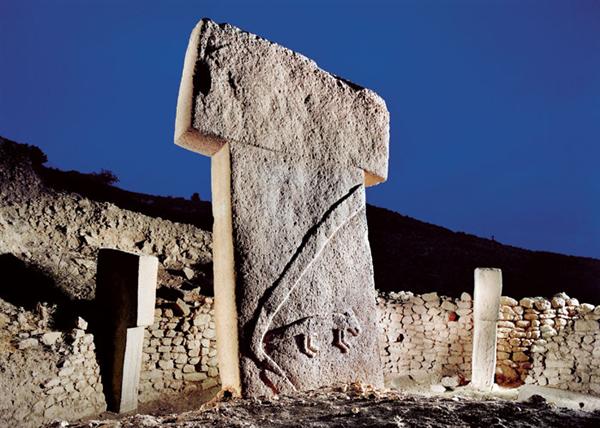 They call it potbelly hill, after the soft, round contour of this final lookout in southeastern Turkey. To the north are forested mountains. East of the hill lies the biblical plain of Harran, and to the south is the Syrian border, visible 20 miles away, pointing toward the ancient lands of Mesopotamia and the Fertile Crescent, the region that gave rise to human civilization. And under our feet, according to archeologist Klaus Schmidt, are the stones that mark the spot—the exact spot—where humans began that ascent. 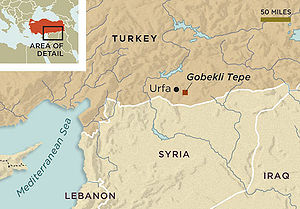 Standing on the hill at dawn, overseeing a team of 40 Kurdish diggers, the German-born archeologist waves a hand over his discovery here, a revolution in the story of human origins. Schmidt has uncovered a vast and beautiful temple complex, a structure so ancient that it may be the very first thing human beings ever built. The site isn’t just old, it redefines old: the temple was built 11,500 years ago—a staggering 7,000 years before the Great Pyramid, and more than 6,000 years before Stonehenge first took shape. The ruins are so early that they predate villages, pottery, domesticated animals, and even agriculture—the first embers of civilization. In fact, Schmidt thinks the temple itself, built after the end of the last Ice Age by hunter-gatherers, became that ember—the spark that launched mankind toward farming, urban life, and all that followed.

Göbekli Tepe—the name in Turkish for "potbelly hill"—lays art and religion squarely at the start of that journey. After a dozen years of patient work, Schmidt has uncovered what he thinks is definitive proof that a huge ceremonial site flourished here, a "Rome of the Ice Age," as he puts it, where hunter-gatherers met to build a complex religious community. Across the hill, he has found carved and polished circles of stone, with terrazzo flooring and double benches. All the circles feature massive T-shaped pillars that evoke the monoliths of Easter Island. 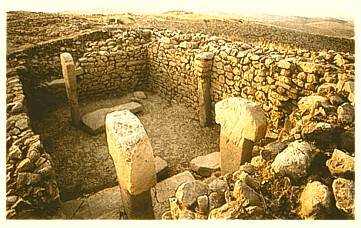 Though not as large as Stonehenge—the biggest circle is 30 yards across, the tallest pillars 17 feet high—the ruins are astonishing in number. Last year Schmidt found his third and fourth examples of the temples. Ground-penetrating radar indicates that another 15 to 20 such monumental ruins lie under the surface. Schmidt’s German-Turkish team has also uncovered some 50 of the huge pillars, including two found in his most recent dig season that are not just the biggest yet, but, according to carbon dating, are the oldest monumental artworks in the world.

The new discoveries are finally beginning to reshape the slow-moving consensus of archeology. Göbekli Tepe is "unbelievably big and amazing, at a ridiculously early date," according to Ian Hodder, director of Stanford’s archeology program. Enthusing over the "huge great stones and fantastic, highly refined art" at Göbekli, Hodder—who has spent decades on rival Neolithic sites—says: "Many people think that it changes everything…It overturns the whole apple cart. All our theories were wrong."

Schmidt’s thesis is simple and bold: it was the urge to worship that brought mankind together in the very first urban conglomerations. The need to build and maintain this temple, he says, drove the builders to seek stable food sources, like grains and animals that could be domesticated, and then to settle down to guard their new way of life. The temple begat the city.

This theory reverses a standard chronology of human origins, in which primitive man went through a "Neolithic revolution" 10,000 to 12,000 years ago. In the old model, shepherds and farmers appeared first, and then created pottery, villages, cities, specialized labor, kings, writing, art, and—somewhere on the way to the airplane—organized religion. As far back as Jean-Jacques Rousseau, thinkers have argued that the social compact of cities came first, and only then the "high" religions with their great temples, a paradigm still taught in American high schools.

Religion now appears so early in civilized life—earlier than civilized life, if Schmidt is correct—that some think it may be less a product of culture than a cause of it, less a revelation than a genetic inheritance. The archeologist Jacques Cauvin once posited that "the beginning of the gods was the beginning of agriculture," and Göbekli may prove his case.

The builders of Göbekli Tepe could not write or leave other explanations of their work. Schmidt speculates that nomadic bands from hundreds of miles in every direction were already gathering here for rituals, feasting, and initiation rites before the first stones were cut. The religious purpose of the site is implicit in its size and location. "You don’t move 10-ton stones for no reason," Schmidt observes. "Temples like to be on high sites," he adds, waving an arm over the stony, round hilltop. "Sanctuaries like to be away from the mundane world."

Unlike most discoveries from the ancient world, Göbekli Tepe was found intact, the stones upright, the order and artistry of the work plain even to the un-trained eye. Most startling is the elaborate carving found on about half of the 50 pillars Schmidt has unearthed. There are a few abstract symbols, but the site is almost covered in graceful, naturalistic sculptures and bas-reliefs of the animals that were central to the imagination of hunter-gatherers. Wild boar and cattle are depicted, along with totems of power and intelligence, like lions, foxes, and leopards. Many of the biggest pillars are carved with arms, including shoulders, elbows, and jointed fingers. The T shapes appear to be towering humanoids but have no faces, hinting at the worship of ancestors or humanlike deities. "In the Bible it talks about how God created man in his image," says Johns Hopkins archeologist Glenn Schwartz. Göbekli Tepe "is the first time you can see humans with that idea, that they resemble gods."

The temples thus offer unexpected proof that mankind emerged from the 140,000-year reign of hunter-gatherers with a ready vocabulary of spiritual imagery, and capable of huge logistical, economic, and political efforts. A Catholic born in Franconia, Germany, Schmidt wanders the site in a white turban, pointing out the evidence of that transition. "The people here invented agriculture. They were the inventors of cultivated plants, of domestic architecture," he says.

Göbekli sits at the Fertile Crescent’s northernmost tip, a productive borderland on the shoulder of forests and within sight of plains. The hill was ideally situated for ancient hunters. Wild gazelles still migrate past twice a year as they did 11 millennia ago, and birds fly overhead in long skeins. Genetic mapping shows that the first domestication of wheat was in this immediate area—perhaps at a mountain visible in the distance—a few centuries after Göbekli’s founding. Animal husbandry also began near here—the first domesticated pigs came from the surrounding area in about 8000 B.C., and cattle were domesticated in Turkey before 6500 B.C. Pottery followed. Those discoveries then flowed out to places like Çatalhöyük, the oldest-known Neolithic village, which is 300 miles to the west. 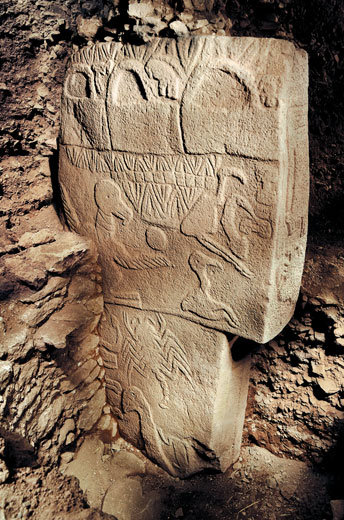 The artists of Göbekli Tepe depicted swarms of what Schmidt calls "scary, nasty" creatures: spiders, scorpions, snakes, triple-fanged monsters, and, most common of all, carrion birds. The single largest carving shows a vulture poised over a headless human. Schmidt theorizes that human corpses were ex-posed here on the hilltop for consumption by birds—what a Tibetan would call a sky burial. Sifting the tons of dirt removed from the site has produced very few human bones, however, perhaps because they were removed to distant homes for ancestor worship. Absence is the source of Schmidt’s great theoretical claim. "There are no traces of daily life," he explains. "No fire pits. No trash heaps. There is no water here." Everything from food to flint had to be imported, so the site "was not a village," Schmidt says. Since the temples predate any known settlement anywhere, Schmidt concludes that man’s first house was a house of worship: "First the temple, then the city," he insists. 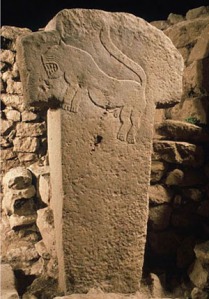 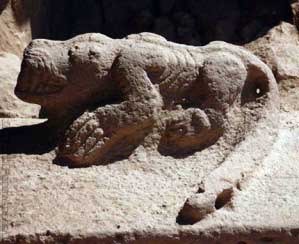 Some archeologists, like Hodder, the Neolithic specialist, wonder if Schmidt has simply missed evidence of a village or if his dating of the site is too precise. But the real reason the ruins at Göbekli remain almost unknown, not yet incorporated in textbooks, is that the evidence is too strong, not too weak. "The problem with this discovery," as Schwartz of Johns Hopkins puts it, "is that it is unique." No other monumental sites from the era have been found. Before Göbekli, humans drew stick figures on cave walls, shaped clay into tiny dolls, and perhaps piled up small stones for shelter or worship. Even after Göbekli, there is little evidence of sophisticated building. Dating of ancient sites is highly contested, but Çatalhöyük is probably about 1,500 years younger than Göbekli, and features no carvings or grand constructions. The walls of Jericho, thought until now to be the oldest monumental construction by man, were probably started more than a thousand years after Göbekli. Huge temples did emerge again—but the next unambiguous example dates from 5,000 years later, in southern Iraq.

The site is such an outlier that an American archeologist who stumbled on it in the 1960s simply walked away, unable to interpret what he saw. On a hunch, Schmidt followed the American’s notes to the hilltop 15 years ago, a day he still recalls with a huge grin. He saw carved flint everywhere, and recognized a Neolithic quarry on an adjacent hill, with unfinished slabs of limestone hinting at some monument buried nearby. "In one minute—in one second—it was clear," the bearded, sun-browned archeologist recalls. He too considered walking away, he says, knowing that if he stayed, he would have to spend the rest of his life digging on the hill.

Now 55 and a staff member at the German Archaeological Institute, Schmidt has joined a long line of his countrymen here, reaching back to Heinrich Schliemann, the discoverer of Troy. He has settled in, marrying a Turkish woman and making a home in a modest "dig house" in the narrow streets of old Urfa. Decades of work lie ahead.

Disputes are normal at the site—the workers, Schmidt laments, are divided into three separate clans who feud constantly. ("Three groups," the archeologist says, exasperated. "Not two. Three!") So far Schmidt has uncovered less than 5 percent of the site, and he plans to leave some temples untouched so that future researchers can examine them with more sophisticated tools.

Whatever mysterious rituals were conducted in the temples, they ended abruptly before 8000 B.C., when the entire site was buried, deliberately and all at once, Schmidt believes. The temples had been in decline for a thousand years—later circles are less than half the size of the early ones, indicating a lack of resources or motivation among the worshipers. This "clear digression" followed by a sudden burial marks "the end of a very strange culture," Schmidt says. But it was also the birth of a new, settled civilization, humanity having now exchanged the hilltops of hunters for the valleys of farmers and shepherds. New ways of life demand new religious practices, Schmidt suggests, and "when you have new gods, you have to get rid of the old ones."

Edmund Marriage - Global Catastrophe, Restart of Civilization & The Anu-Nagi (The Shining Ones)

Gary Biltcliffe - The Legacy of the Etruscans & The Mysterious Pelasgi