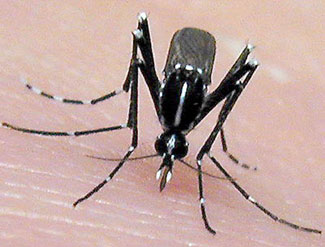 Researchers in United States have developed genetically modified mosquitoes that could one day help defeat one of the world's deadliest diseases. These mosquitoes have a higher survival rate than mosquitoes that are infected with malaria.

Researchers said that releasing such mosquitoes in the wild could play a very important role in curbing malaria, which according to CDC kills 700,000 to 2.7 million people annually. Scientists at Johns Hopkins University in Baltimore observed mosquitoes that were genetically modified in the sense that they had an additional gene.

The mosquitoes were then fed on malaria infected mice. After nine generations, researchers found that the number of malaria-resistant or transgenic mosquitoes comprised of over 70 percent of the total mosquito population. However Jason Rasgon, from the department of molecular microbiology and immunology at Johns Hopkins University, said that the tests were carried out in laboratory and things could be different in wild.

"This was proof of principle. The next step would be to work in a system more epidemiologically relevant. We're not anywhere near a field release", he said.

In the report, published in Proceedings of the National Academy of Sciences journal, the researchers wrote, "To our knowledge, no-one has previously reported a demonstration that transgenic mosquitoes can exhibit a fitness advantage over non-transgenics."

A genetically modified (GM) strain of malaria-resistant mosquito has been created that is better able to survive than disease-carrying insects.

It gives new impetus to one strategy for controlling the disease: introduce the GM insects into wild populations in the hope that they will take over.

The insect carries a gene that prevents infection by the malaria parasite.

Details of the work by a US team appear in Proceedings of the National Academy of Sciences journal.

The researchers caution that their studies are still at an early stage, and that it could be 10 years or more before engineered insects are released into the environment.

"What we did was a laboratory, proof-of-principle experiment; we're not anywhere close to releasing them into the wild right now," co-author Dr Jason Rasgon from Johns Hopkins University in Baltimore, Maryland, told BBC News.

The approach exploits the fact that the health of infected mosquitoes is itself compromised by the parasite they spread. Insects that cannot be invaded by the parasite are therefore likely to be fitter and out-compete their disease-carrying counterparts.

In the team's experiments, equal numbers of genetically modified and ordinary "wild-type" mosquitoes were allowed to feed on malaria-infected mice.

As they reproduced, more of the GM, or transgenic, mosquitoes survived. After nine generations, 70% of the insects belonged to the malaria-resistant strain.

The scientists also inserted the gene for green fluorescent protein (GFP) into the transgenic mosquitoes which made their eyes glow green.

This helped the researchers to easily count the transgenic and non-transgenic insects.

Lead author Dr Mauro Marrelli and his colleagues wrote in PNAS: "To our knowledge, no-one has previously reported a demonstration that transgenic mosquitoes can exhibit a fitness advantage over non-transgenics."

The modified mosquitoes had a higher survival rate and laid more eggs.

However, when both sets of insects were fed non-infected blood they competed equally well.

Even so, the researchers concluded: "The results have important implications for implementation of malaria control by means of genetic modification of mosquitoes."

GM mosquitoes that interfered with development of the malaria parasite would make it more difficult for the organism to become re-established after it had been eradicated from a target area, they said.

Malaria, spread by the single-celled parasite Plasmodium, is endemic in parts of Asia, Africa, and central and south America.

The organism is passed to humans through the bite of the Anopheles mosquito. Each year it makes 300 million people ill and causes a million deaths worldwide.

Some 90% of cases are in sub-Saharan Africa, where a child dies of malaria every 30 seconds.

Dr Rasgon stressed that one area the team needed to look at further was the type of malaria used in the experiments.

The mice were infected with Plasmodium berghei, which is specific to rodents. There was a big difference, he said, between this parasite and the species that blight humans; and the technique would have to be demonstrated in those organisms as well.

"I think it will be 10 to 20 years before transgenic mosquitoes are released into nature. It's very difficult to predict what will happen when we release these things," he added.

"There is quite a lot of research that needs to be done, both in terms of genetics and the ecology of the mosquitoes; and also research to address all the social, ethical and legal issues associated with releasing transgenic organisms into the environment."

Commenting on the study, Professor Chris Curtis from the London School of Hygiene and Tropical Medicine, UK, said many strategies would be needed to combat malaria effectively.

Even if GM mosquitoes were shown to be effective in the first instance, it was always possible that the parasite would evolve to limit that success, he explained.

"There will obviously be strong selection pressure on the malaria parasite to do that; and that's a problem with anti-malaria drugs and insecticides. We have to keep working to produce new tricks to try to keep ahead of what the parasite will try to do," he told BBC News.

He said his work in Tanzania had shown bednets laced with insecticide were very effective in combating infections. - bbc