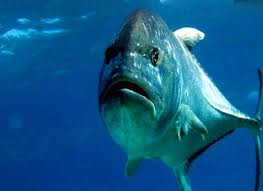 Dumping iron in the seas can help transfer carbon from the atmosphere and bury it on the ocean floor for centuries, helping to fight climate change, according to a study released on Wednesday.

The report, by an international team of experts, provided a boost for the disputed use of such ocean fertilisation for combating global warming. But it failed to answer questions over possible damage to marine life.

When dumped into the ocean, the iron can spur growth of tiny plants that carry heat-trapping carbon to the ocean floor when they die, the study said.

Scientists dumped seven tonnes of iron sulphate, a vital nutrient for marine plants, into the Southern Ocean in 2004. At least half of the heat-trapping carbon in the resulting bloom of diatoms, a type of algae, sank below 1,000 metres (3,300 ft).

"Iron-fertilised diatom blooms may sequester carbon for timescales of centuries in ocean bottom water and for longer in the sediments," the team from more than a dozen nations wrote in the journal Nature.

He [Victor Smetacek of the Alfred Wegener Institute in Germany] said that ocean fertilisation should be overseen by the United Nations and should not be eligible for carbon credits under U.N. treaties. He said private companies should not be allowed to run experiments so that proper oversight can be ensured.

Read the full article at: csmonitor.com

Fertilizing the Ocean with Iron -
Should we add iron to the sea to help reduce greenhouse gases in the air?
By Hugh Powell | WHOI.edu

“Give me half a tanker of iron, and I’ll give you an ice age” may rank as the catchiest line ever uttered by a biogeochemist. The man responsible was the late John Martin, former director of the Moss Landing Marine Laboratory, who discovered that sprinkling iron dust in the right ocean waters could trigger plankton blooms the size of a small city. In turn, the billions of cells produced might absorb enough heat-trapping carbon dioxide to cool the Earth’s warming atmosphere.

Never mind that Martin was only half serious when he made the remark (in his “best Dr. Strangelove accent,” he later recalled) at an informal seminar at Woods Hole Oceanographic Institution (WHOI) in 1988. With global warming already a looming problem, others were inclined to take him seriously.

At the time, ice-core records suggested that during past glacial periods, natural iron fertilization had repeatedly drawn as much as 60 billion tons of carbon out of the atmosphere. Laboratory experiments suggested that every ton of iron added to the ocean could remove 30,000 to 110,000 tons of carbon from the air. Early climate models hinted that intentional iron fertilization across the entire Southern Ocean could erase 1 to 2 billion tons of carbon emissions each year—10 to 25 percent of the world’s annual total.

Since 1993, 12 small-scale ocean experiments have shown that iron additions do indeed draw carbon into the ocean—though perhaps less efficiently or permanently than first thought. Scientists at the time agreed that disturbing the bottom rung of the marine food chain carried risks. 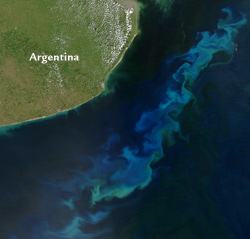 The brilliant swirls of green and blue in the midst of the deep, blue Atlantic Ocean off Argentina were created by multitudes of tiny marine plants (phytoplankton) that draw carbon dioxide from the atmosphere to grow. Intentionally adding iron to the ocean would fertilize more phytoplankton blooms. Could this help reduce the buildup of greenhouse gases?

Martin made his pronouncement jokingly because he knew that he was glossing over several hindrances to using iron fertilization to sequester carbon in the ocean. Opponents to the idea are quick to point out the three major ones: It may be less efficient than it at first seems; it raises a host of new, worrying consequences; and its effectiveness is difficult for anyone to measure.

In certain regions, including the equatorial and north Pacific and the entire Southern Ocean, a simple iron addition does cause phytoplankton to grow rapidly. But tiny zooplankton, known as “grazers,” eat much of the bloom almost as soon as it starts. This begins a chain of recycling that ensues from the sea surface to the seafloor as grazers, krill, fish, whales, and decomposers feed upon each other. Much of the immense carbon prize won by the iron addition quickly leaks back into the atmosphere as carbon dioxide gas.

Large-scale iron fertilization, in altering the base of the food chain, might lead to undesirable changes in fish stocks and whale populations. Increased decomposition of sinking organic matter could deprive deep waters of oxygen or produce other greenhouse gases more potent than carbon dioxide, such as nitrous oxide and methane. The plankton-choked surface waters could block sunlight needed by deeper corals, or warm the surface layer and change circulation patterns.

Read the full article at: whoi.edu

Michael Murphy - What in the World are They Spraying?