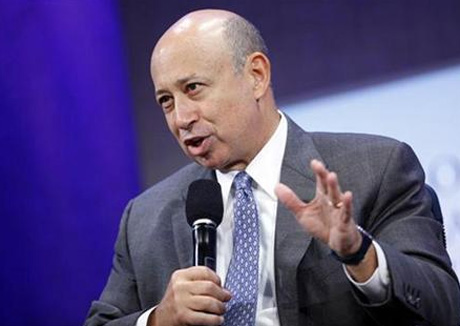 Lloyd Blankfein, Chairman and CEO of Goldman Sachs, speaks during a panel discussion at the Clinton Global Initiative in New York September 23, 2009.

Goldman Sachs behind every market crash since 1920s

The chief executive of Goldman Sachs, which has attracted widespread media attention over the size of its staff bonuses, believes banks serve a social purpose and are doing "God's work."

In an interview with London's Sunday Times newspaper, Lloyd Blankfein also said he believed big profits and bonuses at banks were a sign that the world economy was recovering.

"We help companies to grow by helping them to raise capital. Companies that grow create wealth. This, in turn, allows people to have jobs that create more growth and more wealth. We have a social purpose," he told the paper.

The dominant Wall Street bank posted third-quarter earnings of $3 billion and plans to hand out more than $20 billion in year-end bonuses.

"Others made no money and still paid large bonuses. Some are not around anymore. I wonder why?"

He added that he understood, however, that people were angry with bankers' actions: "I know I could slit my wrists and people would cheer."