Google and the World Brain 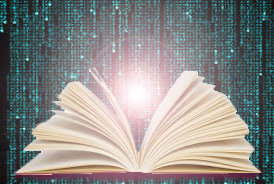 In a BBC documentary, “Google and the World Brain,” the issue of author copyright is explored. Google has scanned and published out-of-print books that are still covered by copyright.

Interviewed, Kevin Kelly (twitter) (also here and here), the co-founder of Wired, makes a startling remark. In his view the whole issue of copyright is archaic. He explains that all authors draw their ideas from previous authors and therefore don’t own their own ideas.

It’s wonderful to witness such bloviating on the cusp of the New Civilization, in which “you didn’t build that” is taken to unprecedented levels.

Kelly should start a publishing firm; all his authors would work for free. After all, nothing is original, nothing is new, and these writers are merely rearranging other people’s words.

You might be surprised at how many people actually believe this tripe Kelly is passing along.

It’s part of the vastly expanding operation aimed at the individual.

The “modern” position is, we’re all one great big group. Kelly adds an historical touch. We’re just recycling the past.

Rimbaud was just redoing Shelley. Dylan Thomas was adding a few exhibitionist touches to Shakespeare, who was aping Sophocles. Plato was mimicking generations of Egyptian high priests. Socrates was staging dialogues based on arguments between cave men.

If we could climb into a time machine, we could travel back to the age of the Neanderthals and find all subsequent ideas of any value in their conversations. Certainly.

And I’m sure the Neanderthals were stealing thoughts after listening to what ants and gorillas and cabbages were saying.

The individual imagines and creates? Ho-ho-ho. Ridiculous. Kelly has put a lid on that fiction. Perhaps he’ll publish a list of authors from whom he’s borrowed, and then we can read their work and ignore his.

Yes, it’s all spiritual collectivism, and we’re melting down into one cosmic goo-glob, and it’s marvelous. Everything is free.

Read the full article at: jonrappoport.wordpress

Sophia Stewart & Ed Small - Mother of The Matrix & The Terminator

Radio 3Fourteen - Jon Rappoport - The Artist Against the System

Radio 3Fourteen - Jon Rappoport - The Individual vs. The Planned State