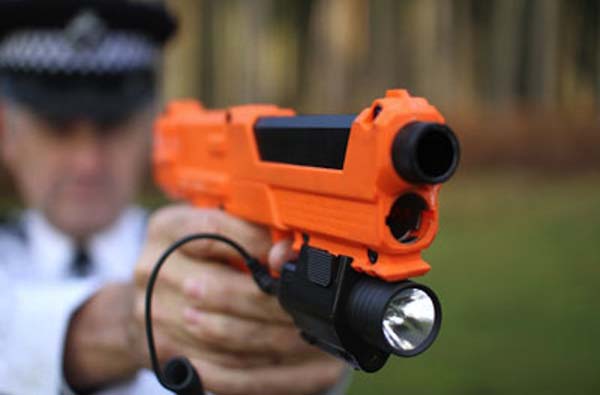 Criminals are often caught because they leave their DNA at a crime scene. Now police can catch a criminal by leaving DNA on the suspect.

The technique involves firing a type of paintball gun that shoots a pellet filled with artificial DNA instead of dye. It was built by SelectDNA, a company in the U.K.

The DNA fluoresces when exposed to ultraviolet light, showing that the person was hit with the pellet. Using the DNA would enable police to identify people who participated in riots, for example. That way, police could try rounding up perpetrators after a situation has calmed down.

Each batch of pellets has its own DNA signature, so a person who was hit with one could be tied to certain event, since a police officer would be using different pellets on different days.

It’s even possible to identify people long after the fact: the DNA, according to the company, sticks to clothing through several washings and to skin for about two weeks. The DNA isn’t alive, so there’s no danger of it mutating or causing any health problems.

DNA tagging has been applied in other areas – the military is using it already to track counterfeit electronic parts. SelectDNA and several other companies also make anti-theft DNA tags that glow with a unique marker when hit with UV light, identifying the owner. Some businesses have even installed sprayers that squirt a thief with such DNA tags.

The use of the tagging guns by police, though, raises questions. The DNA marker could tie a person to an event, but it doesn’t say anything about what they were doing at the time. So if an officer were to fire a dozen pellets at people, it’s quite possible that he would hit innocent bystanders, rather than those inciting violence.

Then there is the question of arresting people after the fact when they take part in protests. Certainly many government that take a dimmer view of political dissent might see this as a great way to tag people for future identification.

Fingerprints Could Glow For Future Forensics

Which raises yet another issue: to identify a person later on, you’d have to find them – and the only way to do that is to check every person in the neighborhood for a DNA tag. For British citizens or Americans, daily checkpoints would probably run into legal problems – the New York Civil Liberties Union has challenged “stop and frisk” policies in New York City.

It certainly gives a new meaning to the old game of paintball.