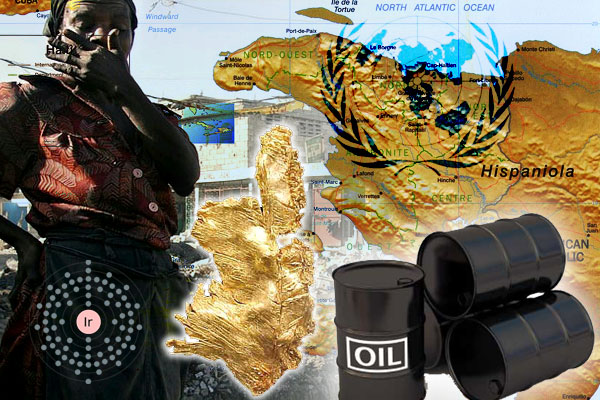 Ed Comment: Oil, Gold and Minerals resources like Iridium would explain why the post earthquake occupation/invasion has taken place in Haiti by the UN and US forces primarily. The EU is now also sending Poilce to Port-au-Prince.

U to send police force to Haiti

This article is translated from French - Translation might not be 100% correct. Source: metropolehaiti.com

Scientists Daniel and Ginette Mathurin indicate that under Haitian soil is rich in oil and fuel fossible which were collected by Haitian and foreign experts. "We have identified 20 sites Oil, launches Daniel Mathurin stating that 5 of them are considered very important by practitioners and policies.

The Central Plateau, including the region of Thomond, the plain of the cul-de-sac and the bay of Port-au-Prince are filled with oil, he said, adding that Haiti's oil reserves are larger than those of Venezuela . An Olympic pool compared to a glass of water that is the comparison to show the importance of oil Haitian compared to those of Venezuela, "he explains.

Venezuela is one of the world's largest producers of oil.

Daniel Mathurin reveals that investigations of several previous governments have allowed to verify the existence of these large deposits of oil. It reminds a document of Lavalas party to power in 2004, had specified the number of sites in Haiti hydrocarbons.

According to Daniel et Ginette Mathurin, the lake region, with cities like Thomazeau and Cornillon, contains large deposits of oil.

Asked about the non-exploitation of these sites, Ginette Mathurin said that these deposits are declared strategic reserves of the United States of America. While stating his incomprehension of such a situation, it reminds that the Caribbean is considered the backyard of the United States.

But Daniel and Ginette Mathurin indicate that the U.S. government in 2005 authorized the use of strategic reserves of the United States. This door must be used by the Haitian political négiciations to launch with U.S. companies with a view to exploiting these deposits adds Daniel Mathurin

Experts argue that the government acted Jean Claude Duvalier had verified the existence of a major oilfield in the bay of Port-au-Prince shortly before its fall.

Moreover, Daniel et Ginette Mathurin show that uranium 238 and 235 and the deposit zyconium exist in several regions including in Jacmel. Uranium is used in nuclear reactors to produce electrical energy.

Haiti has huge resources of Gold and other Minerals

This article is translated from Spanish - Translation might not be 100% correct.

The former president of the Dominican Petroleum Refinery (REFIDOMSA), Leopoldo Espaillat Nanita, considered one of the solutions of the Haitian State to pay its foreign debt and solve socio-economic issues that overwhelms Haitians found in deposits of gold and other minerals that owns the territory of the neighboring country.

Espaillat Nanita revealed that according to geological studies and research conducted on Haitian soil, indicating that the nation shares with the Dominican Republic gold deposit, untapped world's largest and a little known and rare mineral that is vital for building of spacecraft and other appliances extraterrestrial iridium. Estos dos recursos son suficientes para aliviar la “pobre” realidad de los nacidos en Haití. These two resources are sufficient to alleviate the "poor" reality of those born in Haiti.

The architect also claimed that these resources are poorly understood because of a multinational conspiracy that aims to extract their natural wealth Haitians, especially those derived from minerals that abound in the neighboring state.

REFIDOMSA's former president said that this group of firms and individuals in State are dedicated to fostering poverty in Haiti, suggesting that the Dominican Republic serves as a crutch to the centuries-old misery and marginality living the vast majority of our neighbors.

In this regard supported the pronouncements of the newly appointed Prime Minister of Haiti, Jean-Max Bellerive, on the search for new alternatives that will facilitate job creation and attracting foreign investors to the smallest of the two who share the island of Hispaniola instead of charges only to the Dominican nation.

Espaillat admitted that in Haiti there is a national class, comprising politicians and intellectuals-mainly belonging to Bellerive, concerned that Haiti's problems are resolved in its territory and not elsewhere, such as its neighbor island.

Former energy official made these statements in an interview conducted on the radio program traces Leaving that airs Monday through Friday Dominican FM station, in schedule 4 to 6 pm.