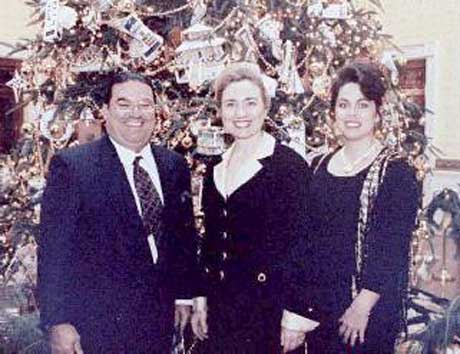 The above photo was taken in front of the White House Christmas tree with Hillary and Clinton campaign donor Jorge Cabreras. Jorge is a convicted drug smuggler and friend of Fidel Castro. According to the New York Times, April 4, 1997, Jorge was solicited for his donation by a Democratic operative in the lobby of a hotel in Havana! The $20,000 check to the Clinton campaign came from an account linked to cocaine money. At the time the above photo was taken, Jorge had two felony convictions, but the Secret Service cleared him to enter the White House anyway.