"If the bee disappeared off the surface of the globe, then man would only have four years of life left." - Albert Einstein 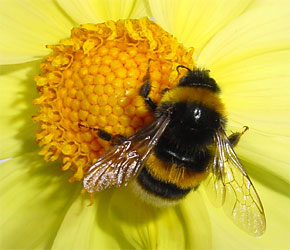 Mobile phones, Wi-Fi networks, electric power lines are sources of "electrosmog" disrupting nature on an unprecedented, massive scale causing birds and bees to lose their bearings, fail to reproduce and die, according to controversial research by Dr. Ulrich Warnke, a lecturer at the University of Saarland, in Germany, who has been studying the effects of man-made electrical fields on wildlife for more than 30 years. Warnke believes that "an unprecedented dense mesh of artificial magnetic, electrical and electromagnetic fields" is being generated, disrupting the "natural system of information" on which the species rely. Bees are able to change the polarity of their antennae at will, which enables them to navigate using the Earth's magnetic fields.

"Man-made technology has created transmitters which have fundamentally changed the natural electromagnetic energies and forces on the earth's surface," Warnke says. "Animals that depend on natural electrical, magnetic and electromagnetic fields for their orientation and navigation are confused by the much stronger and constantly changing artificial fields." He adds that the world's natural electrical and magnetic fields have had a "decisive hand in the evolution of species".

Warnke's research, reported in the Independent has shown that "bees exposed to the kinds of electrical fields generated by power lines killed each other and their young, while ones exposed to signals in the same range as mobile phones lost much of their homing ability.

German research has long shown that bees' behavior changes near power lines. A limited study at Landau University has found that bees do not to return to their hives when mobile phones are placed nearby. Dr Jochen Kuhn, who carried out the study, confirmed this could be a possible cause of the beehive collapses.

Colony Collapse Disorder (CCD) is what scientists call the occurrence of a hive’s disappearance. Usually only queens, eggs and a few immature workers are left behind. The vanished bees are never found, but thought to die individually, lost far from the hive. Another bizarre twist is that parasites, wildlife and other bees that normally raid the honey and pollen left behind when a colony dies, refuse to go anywhere near the abandoned hives.

The West Coast has lost over 60 percent of its commercial bee population, and 70 percent of the population is now missing on the East Coast. It phenomenon seemed to start last autumn, and has now hit half of all American states. CCD has also spread from Germany all the way down to Greece.

No one knows for sure why it is happening, however the proposed theories involving mites, pesticides, global warming and GM crops all have drawbacks, that the cell phone conclusion does not share. However, many question remain unanswered and more research is needed to conclusively determine the true cause.