Is Sweden Raising a Generation of Brats?

Is Sweden raising a generation of brats? 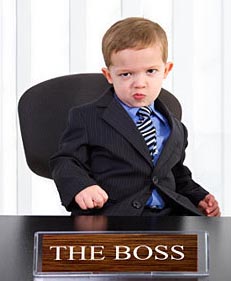 The country has built a child-friendly reputation on its mandates for long parental leave and provision for state-funded day care from age 1. But a new book paints an ugly underbelly to Scandinavia’s child-centric ways. Youngsters here—deemed "competent individuals" by the state and legally protected from spanking—are becoming the chief decision makers in homes at very young ages in what some Swedes think is an alarming trend.

At the center of the discussion is David Eberhard, a Swedish psychiatrist and father of six who published a book titled "How Children Took Power" last year that sparked fierce debate.

Dr. Eberhard says Sweden’s child-centric model has "gone too far" and his book suggests the over-sensitivity to children and a reluctance to discipline has bred a nation of ouppfostrade, which loosely translates to "badly raised children." "All this kowtowing to the kids actually causes kids and society more harm than good," Dr. Eberhard said in an interview. He suggests the trend could contribute to higher anxiety levels or depression at a later stage in life for these children.

His book is currently being translated into English and seeking an American publisher.

"I’m not advocating going back to slapping kids," he said. "Swedish parents have lost control [when] kids take center stage in family life."

Dr. Eberhard has been a guest on nearly every major TV talk show and major newspapers have run (mostly critical) editorials tied to his book. His ideas are popular with a broad base of Swedes who think modern parents are sissies and pushovers when it comes to their kids. On parenting blogs, views on his book are divided about 50-50.

Ian Bald, 42, an American information specialist living in Sweden with two children, agrees that Swedish kids have less fear of adults and more power over decisions than he did as a child. But, he says, "I think it’s good that kids don’t live in a culture where they have this fear of being yelled at for small stuff."

One example Dr. Eberhard cites: A teacher who confiscates the cellphones of children who text or play games in the classroom will later have to answer to parents who say their children’s rights have been violated. Some Swedish teachers end up spending time reasoning with the children to try and get them to put away their cellphones. The same scenario may play out with sending children out of class for talking.

Dr. Eberhard notes that Swedish children routinely make family decisions like what to eat for dinner, what to watch on TV, and where to go on vacation.

"The kids of today, who are the children of parents who did not experience much discipline themselves, become very obstinate and self-centered," says Ida-Maria Lindros, 31, a teacher outside of Stockholm. A typical scene at her school might go like this: "I ask a child to clean up after himself, and he replies ’No, you’re not my boss, you cannot decide what I’m supposed to do,’ " she says. "They’re very anti-authoritarian."

Ms. Lindros says she and her husband try to set boundaries for their two small children. "We put them to bed at the same time every day. And we say no when we have to. We want our kids to be well-behaved," she says.

"If you get your way all the time, you won’t develop empathy and you’ll have problems respecting other people’s wishes," says Beatrice Nyström, a Swedish developmental psychologist.

Strict child-welfare laws may make parents more hesitant to discipline children. Allegations of physical discipline are investigated by a team of police, psychologists and prosecutors, and fines can be steep, reaching the equivalent of $1,000. Arrests are rare.

Core to Dr. Eberhard’s argument is his observation of an increase in anxiety disorders and self-harming problems as Swedish children get older and find themselves "poorly equipped to deal with adult life," he says. Dr. Eberhard is head of the psychiatric ward at Danderyds Sjukhus, a hospital north of Stockholm. The connections he draws are his own "common sense" conclusions and observations, he says, rather than based on scientific studies.

Although it has only two million children, Sweden has played an outsize role in child-rearing discussions since at least 1979 when it became the first of about 30 nations to outlaw spanking.

Dr. Eberhard has long been a controversial figure in Sweden. His first book, "Land of the Safety Junkies," described Sweden as a state of paranoid people.

Critics of Dr. Eberhard’s new book point to the fact the nation is known for a system that produces people capable of generating a steady crop of innovation in a variety of sectors including technology, design and medicine, and Sweden often ranks high in many surveys rating the happiest people in the world.

Swedish author and educator Jonas Himmelstrand says although parents are given long parental leaves to spend time with their children in the first year of life, the Swedish system of universal day care could encourage parents to disconnect after that time.

"The state is sending out the message that you don’t have to raise your children yourself," says Mr. Himmelstrand. "Day care and schools will raise your kids, and when the kids come home, you can just be their friend."

Mr. Himmelstrand says this is to blame for declining Swedish school results in international comparisons.

Article from: online.wsj.com
For more on Scandanavian modern culture and ’Reflections on a "Social Utopia", check out Red Ice’s "What You Didn’t Know About Sweden"