Is the “Smoking Gun” of UFO/Alien Research in Hand? 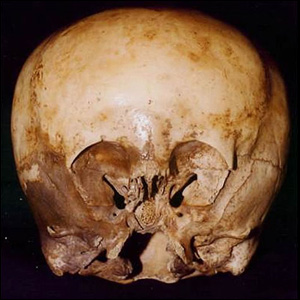 Today the field of UFO/alien research is little different from the imaginary world of Harry Potter. A small minority of “wizards” accept at least the possibility, if not the reality, of otherworldly existence. Wizards are opposed by a vast majority of “muggles” with attitudes about the unknown or unacceptable that range from vapid disinterest to seething outrage. The middle ground is a contentious war zone because both sides lack definitive proof of their position. Wizards have countless examples of “almost” solid proof, while muggles insist that “extraordinary claims require extraordinary proof.”

Well, guess what? The required extraordinary proof is now claimed to be a proverbial “smoking gun” in the hands of researcher Lloyd Pye, a wizard well-known to fans around the world from many appearances on television shows and radio interviews. Pye presents his extraordinary claims and defends them in a new eBook called “The Starchild Skull Essentials.” (Free sample available at: starchildproject.com.)

“I’ve been collecting information about the Starchild skull for ten years now,” Pye explains. “Piece by piece from here and there, never actually seeing it as a congealed whole. But when I sat down to write this new eBook, gathering it all together into one tight knot just blew me away. I realized as never before how incredibly powerful the totality of it is. It actually establishes ‘proof’ that the Starchild could not possibly have been a human deformity. It really is the ‘smoking gun’ of UFO and alien research.”

Pye’s report of extraordinary evidence to support his extraordinary claim is certain to be fighting words for the mass of muggles who tend to attack the credibility of anyone who challenges their reigning paradigms, so Pye knows his assertions will be met head-on. “Oh, sure, scientists and other defenders of the mainstream faith will balk at first,” Pye acknowledges. “But this time they have no leg to stand on. This time they lose, we win.”

His assurance stems from the fact that genetics is at the heart of his proof. “DNA analysis is utterly precise,” he explains, “as precise as math. In fact, genetics is the mathematics of biology. It leaves absolutely no room for argument by anyone. If 50 people say a person committed a crime and DNA says they didn’t, they’ll walk. That’s the power of genetics, to provide us with the amazing proof we can now unleash on an unsuspecting world.”

Admittedly, the mass of photographic evidence in Pye’s eBook can appear overwhelming to untrained eyes because it all seems so convincing. “It’s convincing because it’s real,” he insists. “There is no smoke and mirrors here, no photoshopping, nothing but unaltered photo after photo after photo proving again and again exactly how far away the Starchild skull was from normal humans. Taken as a whole, stacked up like cordwood, these facts can be intimidating, but they are also undeniable. I guarantee they are.”

Pye’s claim of proof of at least one alien being living and dying on earth 900 years ago is as extraordinary as they come, but he is surprisingly sanguine about it. “I’ve known since 2003, when a primer-based DNA test was performed on the Starchild’s DNA. That test established that it had a human mother and a non-human father, but in 2003 we couldn’t prove how far away the father was from a normal human. Without that evidence we were hamstrung, unable to make any definitive claims about it. Now, though, all of that has changed. Now we have a test that can prove our case beyond any scientific doubt.”

That test is an extremely sophisticated DNA analysis technique pioneered by 454 Life Sciences of Branford, Connecticut. It permits the recovery of an entire genome, which is all of the DNA strands of a living being. In humans that is roughly 3.0 billion base pairs. “What we’ll do,” Pye explains, “is compare every base pair in the Starchild’s DNA with those in humans, chimps, gorillas, and even Neanderthals, which are nearly sequenced right now. When we can do that, we’ll be able to show as precisely as a mathematical formula exactly how far away the Starchild’s DNA is from all of the others.”

How far does Pye expect the Starchild’s DNA to stray from normal humans? His answer is blunt and volatile. “It can’t be anywhere near humans. Chimps are 3% different, while gorillas are 5%. Neanderthals could be anywhere between chimps and humans. Yet when you see the evidence of Starchild differences stacked up like cordwood in the new eBook, you realize it has to surpass a gorilla! The Starchild is not even close to being human.”

This statement seems impossible because the Starchild’s DNA proves it had a human mother, but Pye has a surprising answer for that. “Most people think hybrids have to be the result of a sexual union. That’s not true. Sophisticated genetic engineering can create a being with alien nuclear DNA transplanted into a human female egg, and the resulting being would have human mitochondrial DNA from its mother and nuclear DNA from either an alien father, or even a pair of alien parents. In genetics anything is possible.”

Is Lloyd Pye correct in making his extraordinary claims? Does he have the requisite extraordinary proof? He says he does and he says it is available for anyone to evaluate in his new eBook, “Starchild Skull Essentials.” If anyone is inclined to take him up on his challenge, he offers a free sample at starchildproject.com. 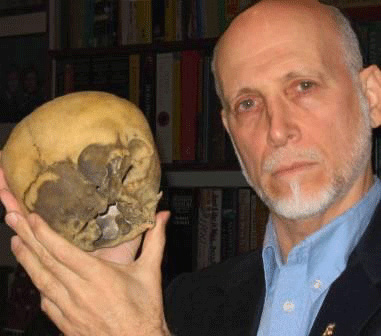 Lloyd Pye with the Starchild Skull

Dan McWilliams is a long-time researcher into UFO and related phenomena. He lives and works in Santa Barbara, California. Contact him at: dmcw08@verizon.net

Don't miss or upcoming Red Ice Radio program with Lloyd Pye for a Starchild Skull update on the latest discoveries. Also tune into our past show's with Lloyd, see related links below.