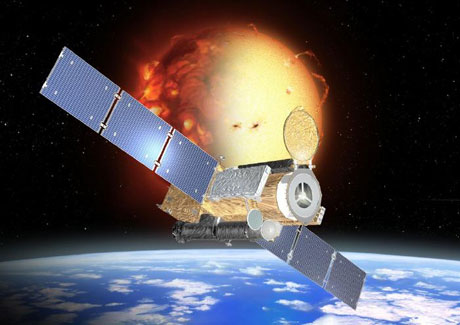 New observations of the Sun gathered by a Japanese probe may finally explain why its outer atmosphere burns white-hot in contrast to its relatively cool surface, scientists said Thursday.

The riddle of the star's white-hot atmosphere, which at several million degrees kelvin is 200 to 300 times warmer than the surface, has intrigued solar physicists for more than 50 years.

The experts tended to fall into two camps, speculating that the extraordinary warmth of the outer atmosphere, or corona, was due to either miniature solar flares or atmospheric (Alfven) waves.

Several research teams had reported evidence of these Alfven waves, which could potentially heat the corona to extreme temperatures by releasing energy as they travel outward from the Sun along magnetic field lines.

But up to this point, scientists had not been able to detect the waves definitively because of the limitations of the available instruments.

The data collected by "Hinode" ("Sunrise" in Japanese), which can precisely measure small changes in the Sun's magnetic field, changed all that.

Images taken by the probe's Solar Optical Telescope suggest that the chromosphere, the region sandwiched between the solar surface and the corona, is riddled with Alven waves, oscillating at 10-25 kilometers per second.

The energy generated by the waves is sufficient to heat the corona which is probably most familiar to the layman as the white band of light that can be seen during the fleeting darkness of a total solar eclipse.

"We don't know how they heat the corona, and we can't be sure where the energy comes from, but we can say the oscillations have enough energy to heat the corona," said Robertus Erdelyi, a professor at the Solar Physics and Space Plasma Research Centre at the University of Sheffield in England.

Erdelyi was the author of an editorial that appeared in the journal Science along with 10 research papers documenting the findings from the Hinode mission.

The satellite, launched September in 2006, has provided scientists with an unprecedented peek at the structures and magnetic fields within the Sun's high-energy plasma, thanks to high-resolution video and images captured by the satellite's spectrometers.

Researchers from NASA and the space agencies of Britain, Europe, Japan, and Norway have been analyzing the data and say it also provides clues to the origins of the solar wind, which blasts through the solar system and buffets planetary atmospheres.

A team lead by Bart de Pontieu of the Lockheed Martin Solar and Astrophysics Laboratory in Palo Alto, California, showed the Alven waves detected by Hinode are vigorous enough to accelerate the solar wind.

Separately, a US team of solar physicists observed record numbers of jets of rapidly moving hot plasma at the Sun's poles, which they believe may contribute to the solar wind.

"The large number of jets, coupled with the high speeds of the outflowing plasma, lends credence to the idea that X-ray jets are a driving force in the creation of the fast solar wind," said Jonathan Cirtain, a solar physicist at NASA's Marshall Space Flight Center in Huntsville, Alabama.