Jan 7, 2013 Source: utne.com
According to the wisdom of the sages, it is better to remain silent than to speak a harsh or cruel truth. 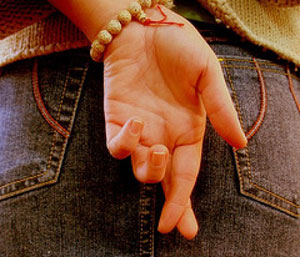 Satya (truthfulness) guides us to think, speak, and act with integrity. The word sat means “that which exists, that which is.” Satya, therefore, is seeing and communicating things as they actually are, not as we wish them to be. This can be quite challenging since our thoughts, beliefs, and past experiences shape and color whatever we see. What we experience as truth one day may not be the same truth we live the next. Practicing satya requires staying open to truth in the present moment, as it reveals itself. Not always an easy task, as I learned firsthand many years ago.

As a college student, I considered myself an honest person, except, of course, for the occasional little white lies that would slip from my lips when I didn’t want to hurt someone’s feelings or admit something to my parents. But, as I came to realize, lies can be such an automatic response that we’re not even aware we’re telling them, or that we’re hurting others and ourselves in the process.

One day, my close friend Don called to see if I wanted to go to a party that night. I told him that as much as I would love to, I didn’t feel well. And as I said it, I started to feel sickish and felt the pull of the couch calling me. I just wanted to nestle under a cozy blanket, sip chamomile tea, and read a good mystery.

Usually Don would sympathize with me and ask if I needed anything. But not today. In a quiet, matter-of-fact tone he said, “You know, if you don’t want to go out tonight, just say so. You don’t need to pretend you’re not well.”

I sputtered some feeble protest that no, I was not pretending. But he wouldn’t let me off the hook. “You know, you tend to do this a lot. Every time you don’t want to do something you say you’re sick.” He wasn’t angry, he said, just concerned that I didn’t feel I could be honest with him. I mumbled another denial and hung up the phone. Then suddenly it hit me: Oh my God, he’s right.

Not only had I been lying to him and others, I had been lying to myself. Without being aware of it, I had learned this response from observing my mother—a young immigrant woman in a strange country with three small children to care for and a demanding husband. From my childhood on, I remember her often being ill after recovering from surgery. But even as she got physically better, it seemed to me that she still used the excuse of not feeling well quite often, especially when my father drank too much, or got angry, or wanted to go out and she didn’t. At such times, I watched this normally capable woman, whom I loved dearly, pop the pills her doctor gave her and fade in front of my eyes, as she shrank into herself to avoid those situations she couldn’t deal with.

And now here I was virtually doing the same thing. Don was right—it had become my default reply. Worse, each time I said it, I honestly believed I didn’t feel well. I would even start to experience physical symptoms. When we lie, the sages say, we disconnect from our higher self; our minds become confused, and we cannot trust ourselves. I no longer knew my own truth. What else am I lying to myself about? I wondered.

Read the full article at: UTNE.com