Jun 12, 2012 Source: bbc.co.uk
The Olympic Stadium will be transformed into the "British countryside" for the opening ceremony of the London 2012 Games on 27 July.

A cast of 10,000 volunteers will help recreate country scenes, against a backdrop featuring farmyard animals and landmarks like Glastonbury Tor.

The opening scene of the £27m ceremony will be called "Green and Pleasant", artistic director Danny Boyle revealed.

He added the show would create "a picture of ourselves as a nation."

"The best way to tell that story is through working with real people," said Boyle, who has reserved a role for NHS nurses in proceedings. 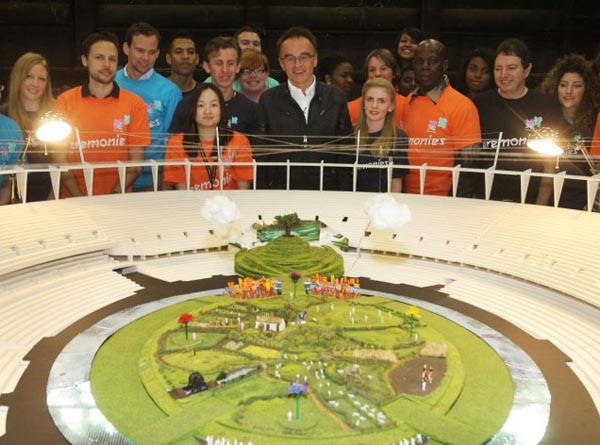 Danny Boyle in front of mock up
There have already been 157 cast rehearsals and Boyle added: "I’ve been astounded by the selfless dedication of the volunteers, they are the pure embodiment of the Olympic spirit and represent the best of who we are as a nation."

The set will feature meadows, fields and rivers, with families taking picnics, people playing sports on the village green and farmers tilling the soil.

Real farmyard animals will be grazing in the "countryside", with a menagerie of 30 sheep, 12 horses, three cows, two goats, 10 chickens, 10 ducks, nine geese and three sheepdogs.

One billion people worldwide are expected to watch the opening ceremony.

Boyle, best known for directing Oscar-winning film Slumdog Millionaire and Trainspotting, said the show was inspired by The Tempest and would be about a land recovering from its industrial legacy.

The bell, which was produced by the Whitechapel Bell Foundry and is inscribed with a quote from The Tempest’s Caliban: "Be not afeard, the isle is full of noises", was installed in the Stadium last week.

Boyle said it was appropriate because: "That’s how communities notified each other that something important was going to happen...after the war the bells were rung in London to announce the peace and we will begin our Games with a symbol of peace."

Among the other features will be two mosh-pits - one representing the Glastonbury festival and another the Last Night of the Proms - filled with members of the public. 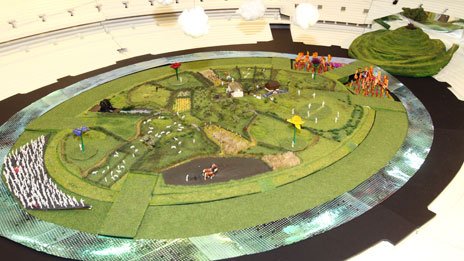 A model of the set being built in the stadium

Tickets for these positions are yet to be allocated, with organisers still to decide how to distribute them.

The set will feature real grass, an oak tree and "clouds" suspended from wires above the stadium - one of which will produce rain, provided the British weather does not provide its own on the night.

Meanwhile, the home nations will be represented by Maypoles topped with a thistle, a leek, a rose and flax.

A full dress rehearsal will be held for a capacity crowd of 80,000 in the Olympic Stadium, which will be fitted with a million-watt sound system.

The production team at 3 Mills Studios is completing work on nearly 13,000 props, while staff in the production department are creating 23,000 costumes for the four Olympic and Paralympic ceremonies.

Seb Coe, who chairs the Organising Committee Locog, said it would be one of the biggest sets ever built for a show.

"I’m sure [it] will be a fantastic celebration that will welcome the 10,500 athletes from around the world and make our nation proud," he said.

The three-hour ceremony will begin at 21:00 BST with "an hour of culture", followed by the athletes parade, then the lighting of the cauldron and a fireworks display to bring down the curtain.

Asked about timings for the ceremony, Boyle said the music will be used to help dictate the pace of athletes parading around the stadium.

The director, who said it would be impossible to keep details of the show secret, said he was trying to represent something of everyone’s dreams in the ceremony and hoped viewers would "find something of themselves" in what they saw.

Like almost everything to do with the Olympics, the art, music and thematic choices for the opening ceremonies are made with wide-ranging symbology in mind.
The selection of ’Green and Pleasant’ is an interesting one in that it not only speaks to the beautiful physical landscapes England possesses, but also indicates the long history of religion and mysticism in the British Isles, and gives a pointed nod to what many believe is the ’Zionist’ message contained in these events.

The "Green and Pleasant" theme is a line taken from William Blake’s 1808 poem, "And did those feet in ancient time", from a collection of writings known as the Prophetic Books.

It is best known today as the anthem "Jerusalem", the music having been added by Sir Hubert Parry in 1916.

The poem was inspired by the apocryphal story that a young Jesus, accompanied by his uncle Joseph of Arimathea, travelled to the area that is now England and visited Glastonbury during Jesus’ lost years. The legend is linked to an idea in the Book of Revelation (3:12 and 21:2) describing a Second Coming, wherein Jesus establishes a new Jerusalem. The Christian Church in general, and the English Church in particular, used Jerusalem as a metaphor for Heaven, a place of universal love and peace.

In the most common interpretation of the poem, Blake implies that a visit of Jesus would briefly create heaven in England, in contrast to the "dark Satanic Mills" of the Industrial Revolution.

And did those feet in ancient time.
Walk upon England’s mountains green:
And was the holy Lamb of God,
On England’s pleasant pastures seen!

And did the Countenance Divine,
Shine forth upon our clouded hills?
And was Jerusalem builded here,
Among these dark Satanic Mills?

I will not cease from Mental Fight,
Nor shall my Sword sleep in my hand:
Till we have built Jerusalem,
In England’s green & pleasant Land

There has been debate over time what was meant by ’satanic mills’. Some researchers suggest it represents the evils of the industrial revolution, the "destruction of nature and human relationships", whereas others propose the ’satanism’ was the Church of England and the "oppressive power of priestcraft in general".

Either way, one cannot miss a call to build a new Jerusalem in England.

Henrik Palmgren discusses correlations between Zionism and the Olympics in his article "2012 Zion Olympics in London Coincide with Tisha B’Av - Commemoration of the Destruction of the Temples in Jerusalem".

The opening ceremonies will also feature landmarks like Glastonbury Tor. 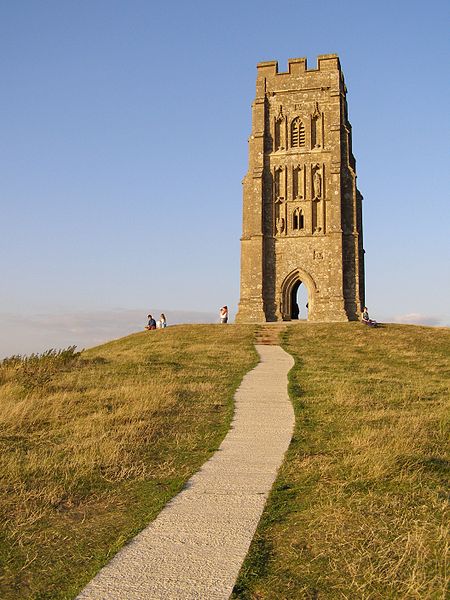 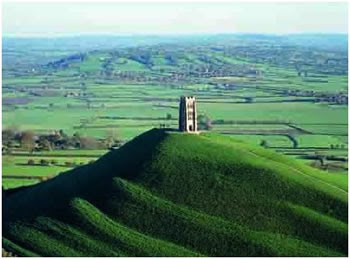 Glastonbury Tor is a hill at Glastonbury, Somerset, England, which features the roofless St. Michael’s Tower.

The spot seems to have been called Ynys yr Afalon (meaning "The Isle of Avalon") by the Britons, and it is believed by some to be the Avalon of Arthurian legend.

The Tor has been associated with the name Avalon, and identified with King Arthur, since the alleged discovery of King Arthur and Queen Guinevere’s neatly labelled coffins in 1191, recounted by Gerald of Wales. Modern archaeology has revealed several sub-Roman structures.

Christopher Hodapp asserts in his book The Templar Code For Dummies that Glastonbury Tor is one of the possible locations of the Holy Grail. This is because it is close to the location of the monastery that housed the Nanteos Cup.

And Did Those Feet.. , Wikipedia